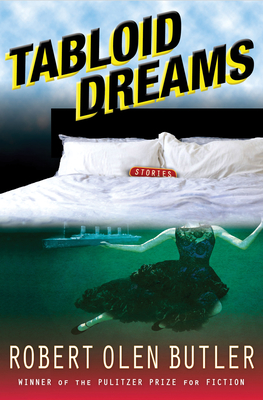 Butler's most imaginative and funniest book. Check out the titles of the stories, and try "Woman Uses Glass Eye to Spy on Philandering Husband" and you'll see what I mean. A keystone publication among modern short fiction.

"An unrepeatable feat, a tour de force." --The Washington Post Book World In Tabloid Dreams, Pulitzer Prize-winning author Robert Olen Butler dazzles with his mastery of the short story and his empathy for eccentric and ostracized characters. Using tabloid headlines as inspiration--"Boy Born with Tattoo of Elvis," "Woman Struck by Car Turns into Nymphomaniac," and "JFK Secretly Attends Jackie Auction"--Butler moves from the fantastic to the realistic, exploring enduring concepts of exile, loss, aspiration, and the search for self. Along the way, the cast includes a woman who can see through her glass eye when it's removed from the socket, a widow who sets herself on fire after losing a baking competition, a nine-year-old hit man, and a woman who dates an extraterrestrial she met in a Walmart parking lot. Tabloid Dreams weaves a seamless tapestry of high and low culture, of the surreal, sordid, and humorously sad.

Robert Olen Butler has published thirteen novels, six story collections, and a book on the creative process, From Where You Dream. In addition to a Pulitzer Prize and two National Magazine Awards, he has received a Guggenheim Fellowship for fiction and an NEA grant, as well as the Richard and Hinda Rosenthal Award from the American Academy of Arts and Letters. He teaches creative writing at Florida State University.

"It is Mr. Butler’s genius in this volume to lure an audience into the tent by shouting versions of the tabloids’ headlines . . . and then providing more than the customer has been led to expect. Turning the lurid third-person titles of his stories into direct testimony from the principles, Mr. Butler often transforms the material’s coarsenessand a reader’s anticipated guffawsinto lyricism and wonder." The New York Times Book Review

"These stories are a real achievement and a true surprise . . . Butler peels back the sleazy veneer of the sensational to expose characters who long for love and the healing comfort of human compassion." USA Today

"To see, to know, to touch, to rememberthese desires have always been at the heart of great fiction. They are here in abundance, along with the skewed and comic tenderness that is Butler’s greatest gift as a writer. You start to read these stories and laugh; then, sucker-punched, you see the sadness and sweetness in each one." The Times-Picayune

"Out of pop culture, Robert Olen Butler extracts a result that looks uncomplicated, but subtly reveals many of the preoccupations of American literatureespecially loneliness, conformity and innocence." The Boston Globe

"These stories are masterpieces of accessible complexityjewels of poignancy molded from what is generally considered a slag heap of modern culture. Tabloid Dreams is a magnificent work of imagination, entertainment and humanity." Ft. Lauderdale Sun-Sentinel

"Daring and uncommonly beautiful literary flights of fancy. There are touches of Italo Calvino, Roald Dahl, and Gabriel García Márquez in them. At the same time, Tabloid Dreams couldn’t be more American in premise, flavor and humor . . . [it] makes its dozen fanciful tales not just real to its readers, but also sublimely reasonable." San Francisco Chronicle

"A hugely entertaining, sometimes dazzling collection from one of our most versatile writers." Atlanta Journal-Constitution

"There’s a beautiful liquidity both to Butler’s prose and to his imagination. Sex and death hold hands and dance in Tabloid Dreams . . . And yet these aren’t sad stories. They’re too funny for that. And in almost every one, there’s a moment of transcendence; for every character, redemption glimmers." Wisconsin State Journal

"Butler has taken a ham’s material and fashioned it into a dozen artful and wondrous tales, once again proving himself to be the rarest kind of writer, one who can’t be pigeonholed, who doesn’t rely on a set, safe shtick but keeps challenging himself with new and varied material." Chicago Tribune

"Straightforward, surreal, hilarious, shocking and ultimately very moving . . . It’s hard to imagine another writer who could achieve such pathos, humor and intensity from such an absurd situation . . . Playwrights come first to mind: Ionesco and Beckett." St. Petersburg Times

"Every story in this collection deserves a prize. Originality, humor, distinctive voices, drop-dead proseButler possesses all these qualities, and he lends them to every story." The Hudson Review

"Butler has a remarkable facility for finding the heart in otherwise trashy lives . . . In trash, suggests Butler, there can always be transcendence." The Village Voice

"Tabloid Dreams is full-blown American magical realism: funny, lyrical, striking, its stories seek and find meaning in our very own myths, the ones we characteristically reinvent every few years to fit our fears and fantasies . . . Butler and his characters convince us that concepts such as conscience, justice, and love are meaningful and necessary, even in a culture whose stock-in-trade is bunk." Boston Book Review