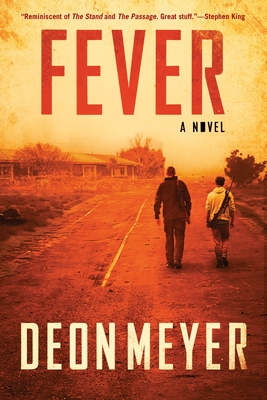 “Fever, which grabbed me from the beginning, takes place in South Africa several years after a devastating illness wipes out most of the planet. It starts as a thrilling survival tale between a brilliant father and his 13-year-old son and quickly evolves into a fascinating study of human nature and the perils of building a new civilization from scratch. The survivalist details throughout the novel are especially fascinating, as are the conflicts within the society as it grows. A dense, captivating read that drew me in and kept me hooked.”
— Elissa Englund (M), Bank Square Books, Mystic, CT

If the planet suffered a catastrophic event would humans discover their better side during the struggle to survive or would all the old superstitions, biases and prejudices still come to the fore?  Deon Meyer probes that question and more in his apocalyptic novel as a group of people in South Africa attempt to build a new society only to discover the old factionalism once again rears its head.  The fast paced story is filled with intrigue and mystery while also serving as a serious study of what can be done by humanity on the edge of extinction.  And readers will also be pleased by the fact that their is definitely an opening for a sequel.

An epic drama from an acclaimed internationally bestselling author--a powerful story of love, betrayal, and survival in a world devastated by a fatal virus known simply as "the Fever."

Nico Storm and his father, Willem, drive a truck filled with essential supplies through a desolate land. A devastating virus has swept over the planet, and they are among its few survivors. Nico―although he is still only a boy―is gifted with superb marksmanship and a cool head, while Willem is a thinker and a leader with a vision for a new community of survivors that they will rebuild from the ruins. And so Amanzi is founded, drawing Storm's "homeless and tempest-tost," including Sofia Bergman, the most beautiful girl Nico has ever seen.

As the community grows, so do the challenges they face―not just from the attacks of biker brigands, but also from within. In this new world, Nico undergoes an extraordinary rite of passage, testing his loyalty to the limits until he faces the greatest rupture of all―the murder of the person he loves most. Propulsively readable, Fever is a gripping epic of humanity striving for a noble vision against its basest impulses.

Deon Meyer is the internationally acclaimed, prizewinning author of eleven thrillers, including Icarus, Cobra, Seven Days, and the Barry Award-winning Thirteen Hours. His books have been published in twenty-seven languages. He lives in Stellenbosch, South Africa.