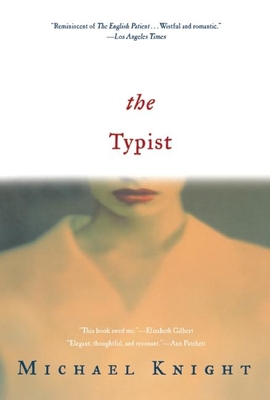 “This novel offers up for our consideration the lives of three boys during the American occupation of Japan -- two American soldiers with no heroic combat feats to their credit, and a Japanese boy attempting to adapt and better himself in an alien environment -- and the lifelong injuries their tours produced. It is a chapter of World War II that has gone largely unnoticed by books, movies and celebrations of remembrance, and yet has produced both casualties as well as stories of hope just the same.”
— Simone Bratcher, Bookin' It!, Belmont, NC

A story of love in war narrated by a young soldier in postwar occupied Japan who works in General MacArthur's office pool. A gem of a novel that appears small but reads big. Highly recommended.

— From Richard's 2015 and older picks
Written with the stunning economy of language for which Michael Knight's work has always been praised, The Typist is a rich and powerful work of historical fiction that expertly chronicles both the politics of the Pacific theater of World War II, and the personal relationships borne from the tragedies of warfare. When Francis Vancleave ("Van") joins the army in 1944, he expects his term of service to pass uneventfully. His singular talent--typing ninety-five words a minute--keeps him off the battlefield and in General MacArthur's busy Tokyo headquarters, where his days are filled with paperwork in triplicate and letters of dictation. But little does Van know that the first year of the occupation will prove far more volatile for him than for the U.S. Army. When he's bunked with a troubled combat veteran-cum-black marketer and recruited to babysit MacArthur's eight-year-old son, Van is suddenly tangled in the complex--and risky--personal lives of his compatriots. As he brushes shoulders with panpan girls and Communists on the streets of Tokyo, Van struggles to uphold his convictions in the face of unexpected conflict--especially the startling news from his war bride, a revelation that threatens Van with a kind of war wound he never anticipated.
Michael Knight is the author of the novel, Divining Rod, the short story collections, Goodnight Nobody and Dogfight and Other Stories, and the novella, The Holiday Season. He teaches creative writing at the University of Tennessee and lives in Knoxville with his family.


The Typist is reminiscent of The English Patientslow, sad, wistful and romantic.”Los Angeles Times

Gambling, prostitutes, bomb craters and black-market transactions: these are the exigencies of a military occupation, or at least of America’s occupation of Tokyo in the mid-1940s. Given the sin-rich atmosphere of The Typist, it may come as a surprise that the tone is more beatific than vulgar. But then Mr Knight has never shied away from taking the unexpected angle in his fiction. . . . Knight’s prose transforms even cheap booze and poor weather into lovely atmospheric touches. . . . [His] elegant prose recalls the fiction of W.G. Sebald, another author who explored the melancholy postwar consciousness with subtle mastery.”The Economist (online)

"The Typist is Knight’s best book yet. It reads with a combination of urgency and a quiet, rush-less path to the novel’s slow reveal. There is not a misstep, not a mislaid sentence. I believed and breathed every single word. This book awed me."Elizabeth Gilbert

"Michael Knight tells the story of generals, war, and occupation through the eyes of a typist who proves himself to be the calm at the center of the storm. The result is this elegant, thoughtful, and resonant novel."Ann Patchett

[A] quiet novel [that] packs a strong philosophical punch.”The Huffington Post (Most Anticipated Novels for 2010)

"Knight is an accomplished author of short fiction, and here he uses those skills to craft a fully realized novel that retains the attributes of the best short stories, including concision and cohesion." Shelf Awareness

Spare in detail but mesmerizing . . . For readers with an interest in post-war Japan, The Typist is an artistic change of pace. For those without an interest, the novel will inform and illuminate.”Author Magazine

The Typist is a compelling meditation on how public events shape private lives. Packing sharp characterization and a rollercoaster plot into a brisk 200 pages, it is also a notable feat of literary economy . . . [and its] brevity is a source of its power. . . . It is no small thing to convince a reader to suspend disbelief about well-known events; Knight does so masterfully.”BookPage

"I loved The Typist. It is a beautiful portrait of a kind of walking pneumonia of the spirit that seeks and finds its own cure. It is also, for me, most impressive because of its settingin a time far before Knight ever drew breath. It is true imagining at its finest."Richard Bausch

Knight paints a disquietingly dreamlike portrait of a postwar Japan that harbors no animosity toward its American conquerors and where Hiroshima becomes a sightseeing destination and the site of an American football game. . . . The Typist is driven by earnest storytelling, and the soft shocks it delivers render this a modest, entertaining story.”Baldwin Register

"Knight paints a disquietingly dreamlike portrait of a postwar Japan . . . Not quite darkly comic, not quite ironic, Knight’s book is driven by earnest, unaffected storytelling."Publishers Weekly

"The narrator's strong first-person voice . . . gives the novel a pensive tone that has more in common with an Alice Munro story than a typical war novel. . . . With its spare, economical prose, this novel brings a different slant to the theme of war and relationships."Library Journal

Knight cunningly details the confluence of the boredom of American soldiers and the economic plight of the post-bombing Japanese. Two cultures collide and gross exploitation occurs, but Knight is still able to craft heartfelt relationships amid the confusion.”Booklist

Lyrical prose balances short, clipped sentences against longer, poetic passages with a grace and control reminiscent of Richard Ford and Tobias Wolff. . . . [The Typist is] a masterful execution of symbiosis between content and form . . . [that] calls to mind Ernest Hemingway . . . Michael Knight has delivered a book that achieves in an astonishingly compressed form all the artistry, depth, and seriousness of a thousand-page doorstop of a war novel. The Typist is a fine addition to the catalogue of World War II novels, capturing an often overlooked facet of the war. But it chiefly deserves attention and admiration for proving effectively that a book need not be long to be big.”Chapter 16 Blog (Tennessee Humanities Council)

Thrilling . . . [with] quiet power . . . Knight produces a number of stunning set-pieces, in which what must have been considerable research is elevated through imagination and skillful prose into marvelously effective scenes that submerge historical detail in effective drama . . . The apparent simplicity of Van’s narrative belies the increasing emotional magnitude of the story he tells. As the tale unfolds, it gradually builds in resonance, and the small elements of narrative and character put in place at the outset erupt in the final pages with seismic effect. By the time Van returns to the United States, his desk-bound military experience feels as authentic, and convulsive, as that of any frontline warrior, and as transformationalfor him and for the reader. . . . [An] elegant, restrained novel.”The Rumpus (online)