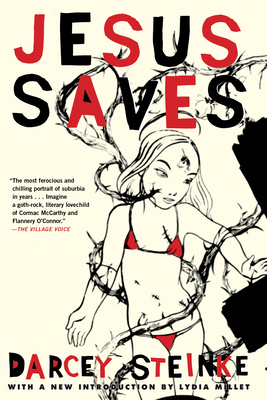 What if Flannery O'Connor wrote Wise Blood in a crummy strip mall instead of Andalusia? The end result would probably resemble this knockout "Christ haunted" novel. Steinke mines the Grotesque in every corner of the deperate press-board universe she's created and paints each page with startling and innovative metaphor. Check it out if you like to chew your words before you read them. WWJD? Probably buy this book.

— From Katelyn
Jesus Saves, a New York Times Notable Book of the Year, is a chilling horror story, a suburban gothic set not among green manicured lawns and cul-de-sacs, but the trash-filled woods between subdivisions and superhighways and the strip malls and duplexes on the back side of town. It's the story of two girls: Ginger, a troubled minister's daughter; and Sandy Patrick, who was abducted from summer camp and now smiles from missing-child posters all over town. Layering the dreamscapes of Alice in Wonderland with the subculture of River's Edge, Darcey Steinke's Jesus Saves is an unforgettable passage through the depths of literary imagination. In her introduction to this new edition, Pulitzer Prize finalist Lydia Millet reflects on the book's long-lasting effect on her and the way she reads while tracing its influence on subsequent, similarly powerful fictions like Emma Donoghue's Room and Barbara Gowdy's Helpless. Like Jesus Saves, Millet's introduction is moving and unsettling, and provides the perfect frame for this cult classic.
Lydia Millet is the PEN Award-winning author of eleven works of literary fiction, including Sweet Lamb of Heaven and Magnificence, which have been New York Times Notable Books and Pulitzer Prize and National Book Award finalists. She lives in Arizona. Darcey Steinke is the author of New York Times Notable Up Through the Water, Suicide Blonde, Sister Golden Hair, and the forthcoming Flash Count Diary. Her journalism has appeared regularly in Spin, George, Guardian (London), Artforum, and The Village Voice. She teaches at Sarah Lawrence College and The New School. She grew up in Virginia and now lives in Brooklyn.