The Last Season: A Father, a Son, and a Lifetime of College Football (Paperback) 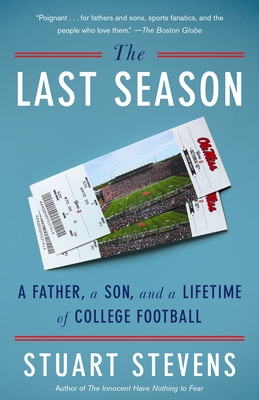 The Last Season: A Father, a Son, and a Lifetime of College Football (Paperback)

Stuart Stevens has written five books on politics and travel, but this one's personal. THE LAST SEASON is an account of the year the author and his 95-year-old father set out to see every Ole Miss game in 2012. Stevens investigates the destinations life has taken him, especially regarding his relationship with his dad. As Pat Conroy says, "It's nuts, it's Ole Miss, it's outrageous, it's got depth and emotion."

Stuart Stevens has written five books on politics and travel, but this one's personal. The Last Season is an account of the year the author and his 95-year-old father set out to see every Ole Miss game in 2012. Stevens investigates the destinations life has taken him, especially regarding his relationship with his dad. As Pat Conroy says, "It's nuts, it's Ole Miss, it's outrageous, it's got depth and emotion."

Fathers, sons, and sports are enduring themes of American literature. Here, in this fresh and moving account, a son returns to his native South to spend a special autumn with his ninety-five-year-old dad, sharing the unique joys, disappointments, and life lessons of Saturdays with their beloved Ole Miss Rebels.

Now, driving to and from the games, and cheering from the stands, they take stock of their lives as father and son, and as individuals, reminding themselves of their unique, complicated, precious bond.

Poignant and full of heart, but also irreverent and often hilarious, The Last Season is a powerful story of parents and children and of the importance of taking a backward glance together while you still can.

STUART STEVENS grew up in Mississippi, a seventh generation Mississippian. For a very long time he's been driven by a fascination and love of politics, film and writing and has pursued those interests throughout his life.

The Last Season: A Father, a Son and a Lifetime of College Football is his sixth book. His earlier books are: Night Train to Turkistan, Malaria Dreams, Feeding Frenzy: Around the World In Search of The Perfect Meal and the novel, Scorched Earth: A Political Love Story. He's written extensively for dramatic television series, starting with Northern Exposure and including I'll Fly Away, K. Street, Commander in Chief and others. His articles and essays have appeared in The New York Times, Esquire, Outside, The Washington Post, Food and Wine and many others.

He has a long time interests in endurance sports which he pursues badly. He's skied the last 100 kilometers to the North Pole and ridden the 1200 km Paris-Brest-Paris cycling event and was the first person to complete all of the World Loppet (Nordic Ski Marathons) in a single season. He wishes he was good at this stuff but still enjoys it.

Stuart Stevens is a partner in the consulting firm Strategic Partners Media (http://strategicpartnersmedia.com) and a columnist for The Daily Beast.

“Poignant. . . . For fathers and sons, sports fanatics, and the people who love them.” —James Sullivan, The Boston Globe

“The lesson of the book is not only how sports create lifelong bonds, but how those memories go beyond the victories. . . .  I learned something from an author whose own life has been based around winning and losing. . . .  There's a lot to be said for bonding that football creates, no matter how the games end.” —Kurt Kragthorpe, The Salt Lake Tribune

“The Last Season is an instant classic. This is an absolute gift to sports fans. I don’t remember when I have enjoyed a book more than this one.  This is a special book, one people will share with their children and grandchildren. This book is truly one for the ages.” —Paul Finebaum

“In his new book, Stuart Stevens takes the time out from his extraordinarily successful life to spend one last season with his 95-year-old father. They spend a final year as father and son paying fanatical attention to every form of madness and bonding that Southern football represents. It’s Ole Miss, it’s nuts, it’s outrageous, it’s got depth and emotion, and it’s one of the best father-son books I’ve read in years. ‘Hotty Toddy’ is the only phrase you need to know to love this book.” —Pat Conroy

“Through the lens of college football, Stuart Stevens has produced a poignant tale of fathers, sons, race, and growing up in the South during the late 1960s. Besides being a delightful read, it is a reminder of the joy of relishing what is meaningful in life.” —Walter Isaacson

“The Last Season is a touching, beautifully written story about the love between a son and his father, and their special lifetime bond formed around ‘Ole Miss’ football. Anyone, man or woman, who does not understand the seemingly insane, intense loyalty and devotion of the College football fan for his team, win or lose, should read this book. We soon find out it’s not just about football, it’s about all the good things in life. And just like all good things, I did not want it to end.” —Fannie Flagg