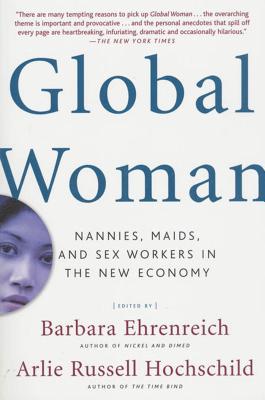 "Important and provocative . . . There are many tempting reasons to pick up Global Woman." —The New York Times

Women are moving around the globe as never before. But for every female executive racking up frequent flier miles, there are multitudes of women whose journeys go unnoticed. Each year, millions leave third world countries to work in the homes, nurseries, and brothels of the first world. This broad-scale transfer of labor results in an odd displacement, in which the female energy that flows to wealthy countries is subtracted from poor ones—easing a "care deficit" in rich countries, while creating one back home.

Confronting a range of topics from the fate of Vietnamese mail-order brides to the importation of Mexican nannies in Los Angeles, Global Woman offers an original look at a world increasingly shaped by mass migration and economic exchange. Collected and with an Introduction by bestselling social critics Barbara Ehrenreich and Arlie Russell Hochschild, this groundbreaking anthology reveals a new era in which the main resource extracted from developing nations is no longer gold or silver, but love.

Barbara Ehrenreich (1941-2022) was a bestselling author and political activist, whose more than a dozen books included Nickel and Dimed, which the New York Times described as "a classic in social justice literature", Bait and Switch, Bright-sided, This Land Is Their Land, Dancing In the Streets, and Blood Rites. An award-winning journalist, she frequently contributed to Harper's, The Nation, The New York Times, and TIME magazine. Ehrenreich was born in Butte, Montana, when it was still a bustling mining town. She studied physics at Reed College, and earned a Ph.D. in cell biology from Rockefeller University. Rather than going into laboratory work, she got involved in activism, and soon devoted herself to writing her innovative journalism.

Arlie Russell Hochschild is the author of The Time Bind, The Second Shift, and The Managed Heart. She is a professor of sociology at the University of California, Berkeley, Her articles have appeared in Harper's, Mother Jones, and Psychology Today, among others. She lives in San Francisco.

“The feminization of the migrant workforce is an enormously important, underreported subject . . . Fascinating, illuminating, harrowing.” —Salon

“These essays offer a broad view with the aim of achieving better treatment of the women who make monumental sacrifices in search of a better life.” —San Francisco Chronicle