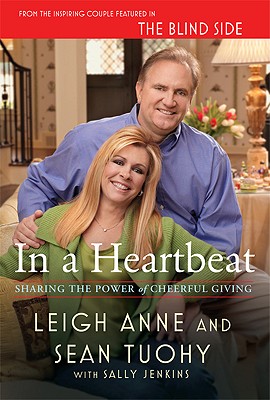 For the first time, the remarkable couple depicted in The Blind Side tells their own deeply inspiring story

First came the bestselling book, then the Oscar-nominated movie—the story of Michael Oher and the family who adopted him has become one of the most talked-about true stories of our time. But until now, Leigh Anne and Sean Tuohy have never told this astonishing tale in their own way and with their own words.

For Leigh Anne and Sean, it all begins with family. Leigh Anne, the daughter of a tough-as-nails U.S. Marshal, decided early on that her mission was to raise children who would become "cheerful givers." Sean, who grew up poor, believed that one day he could provide a home that would be "a place of miracles." Together, they raised two remarkable children—Collins and Sean Jr.—who shared their deep Christian faith and their commitment to making a difference. And then one day Leigh Anne met a homeless African-American boy named Michael and decided that her family could be his. She and her husband taught Michael what this book teaches all of us: Everyone has a blind side, but a loving heart always sees a path toward true charity.

Michael Oher's improbable transformation could never have happened if Leigh Anne and Sean Tuohy had not opened their hearts to him. In this compelling, funny, and profoundly inspiring book, the Tuohys take us on an extraordinary journey of faith and love—and teach us unforgettable lessons about the power of giving.

Leigh Anne Tuohy and Sean Tuohy are the couple depicted in the book and movie "The Blind Side." Leigh Anne grew up in Memphis and attended the University of Mississippi, where she met her future husband; she now owns an interior design company. Sean Tuohy grew up in New Orleans and for several years played professional basketball; he now owns more than seventy restaurant franchises. The Tuohys live in Memphis but travel all over the country speaking to thousands of people about their family, their faith, and how each of us can make a difference.

“If you saw the movie The Blind Side, you saw a family that is quite honestly the most amazing family I think I have ever, ever seen… Remarkable, remarkable people.”—Glenn Beck “In The Blind Side I did my best to describe the full force of Sean and Leigh Anne Tuohy, but there is only so much one writer can do. In A Heartbeat picks up where I left off, and gives the reader a much fuller portrait of these extraordinary people.”—Michael Lewis “All I can say is, if there were more Leigh Anne Tuohys, the world would be a better-run, more harmonious, and more productive place . . . She’s such an amazing person.”—Sandra Bullock “Sean is an all-around good guy, and the inspirational story of what he and his family did for this kid—the time, the effort, and the love he put out—is pretty incredible.”—Tim McGraw “Their book aims to bring the Michael Oher miracle off the big screen and back down to Earth—and make sure that its message won’t get lost here.”—The Baltimore Sun
“For anyone wondering what more there might be to say about the inspiring story of The Blind Side, the answer is: plenty… They write with humor about their quirks and the joy that Michael brought to their family.”—Publishers Weekly