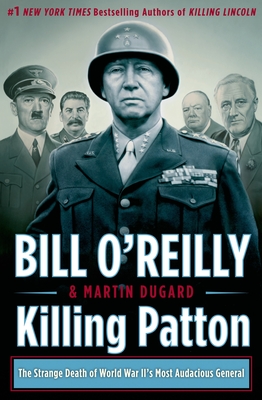 Readers around the world have thrilled to Killing Lincoln, Killing Kennedy, and Killing Jesus--riveting works of nonfiction that journey into the heart of the most famous murders in history.

Now from Bill O'Reilly, iconic anchor of The O'Reilly Factor, comes the most epic book of all in this multimillion-selling series: Killing Patton.

General George S. Patton, Jr. died under mysterious circumstances in the months following the end of World War II. For almost seventy years, there has been suspicion that his death was not an accident--and may very well have been an act of assassination. Killing Patton takes readers inside the final year of the war and recounts the events surrounding Patton's tragic demise, naming names of the many powerful individuals who wanted him silenced.

BILL O’REILLY’s success in broadcasting and publishing is unmatched. He was the iconic anchor of The O'Reilly Factor, the highest-rated cable news broadcast in the nation for 16 consecutive years. His website BillOReilly.com is followed by millions all over the world, his No Spin News is broadcast weekday nights at 8 and 11 (ET) on The First TV, and his O’Reilly Update is heard weekdays on more than 225 radio stations across the country. He has authored an astonishing seventeen #1 bestsellers; his historical Killing series is the bestselling nonfiction series of all time, with over 18 million books in print. O’Reilly has received a number of journalism accolades, including three Emmys and two Emmy nominations. He holds a History degree from Marist College, a master's degree in Broadcast Journalism from Boston University, and a master’s degree from Harvard’s John F. Kennedy School of Government. O’Reilly lives on Long Island where he was raised. His philanthropic enterprises have raised tens of millions for people in need and wounded American veterans.

MARTIN DUGARD is the New York Times bestselling author of several books of history, among them the Killing series, Into Africa, and The Explorers. He and his wife live in Southern California with their three sons.