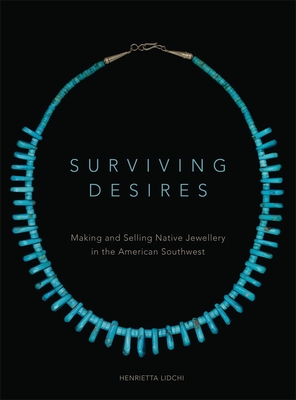 
Usually Arrives in Store in 1-5 Days
In its classic union of gleaming silver and blue turquoise, Native American jewellery of the Southwest is an iconic art form. Internationally recognized and locally significant, Native American jewellery has a compelling history--it represents the persistence of tradition while encapsulating the vitality of Native American communities and the continuously transforming nature of the jewellery makers' art. Author Henrietta Lidchi focuses on jewellery in the cultural economy of the Southwest, exploring jewellery making as a decorative art form in constant transition. She describes the jewellery as subject to a number of desires, controlled at different times by government agencies, individual entrepreneurs, traders, curators, and Native American communities. Lidchi explores the jewellery as craft, material culture, commodity, and adornment. Considering the impact of tourism, she discusses fakes in the market and the artists' desires to codify traditional styles, explaining how these factors can affect stylistic development and value. Surviving Desires suggests the complexity and reinvention innate to Native American jewellery as a commercial craft. Drawing on the author's archival research and on interviews she conducted with Native American jewellers and with traders, dealers, and curators, this volume examines British collecting, exchanges between British and American institutions, and the development of the British Museum's contemporary collection. Lavishly illustrated with 300 color photographs of jewellery in the British Museum, the National Museums Scotland, and major collections in the United States, Surviving Desires presents many previously unpublished pieces and showcases works by Native American jewellers who include the best-known names in the field today. The volume is a visually stunning exploration of the symbolic, economic, and communal value of jewellery in the American Southwest.