Bitter Waters: The Struggles of the Pecos River (Hardcover) 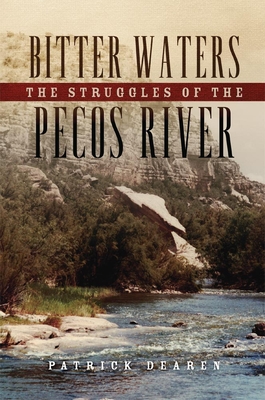 Bitter Waters: The Struggles of the Pecos River (Hardcover)


Rising at 11,750 feet in the Sangre de Cristo range and snaking 926 miles through New Mexico and Texas to the Rio Grande, the Pecos River is one of the most storied waterways in the American West. It is also one of the most troubled. In 1942, the National Resources Planning Board observed that the Pecos River basin "probably presents a greater aggregation of problems associated with land and water use than any other irrigated basin in the Western U.S." In the twenty-first century, the river's problems have only multiplied. Bitter Waters, the first book-length study of the entire Pecos, traces the river's environmental history from the arrival of the first Europeans in the sixteenth century to today. Running clear at its source and turning salty in its middle reach, the Pecos River has served as both a magnet of veneration and an object of scorn. Patrick Dearen, who has written about the Pecos since the 1980s, draws on more than 150 interviews and a wealth of primary sources to trace the river's natural evolution and man's interaction with it. Irrigation projects, dams, invasive saltcedar, forest proliferation, fires, floods, flow decline, usage conflicts, water quality deterioration--Dearen offers a thorough and clearly written account of what each factor has meant to the river and its prospects. As fine-grained in detail as it is sweeping in breadth, the picture Bitter Waters presents is sobering but not without hope, as it also extends to potential solutions to the Pecos River's problems and the current efforts to undo decades of damage. Combining the research skills of an accomplished historian, the investigative techniques of a veteran journalist, and the engaging style of an award-winning novelist, this powerful and accessible work of environmental history may well mark a turning point in the Pecos's fortunes.