Wrecked Lives and Lost Souls: Joe Lynch Davis and the Last of the Oklahoma Outlaws (Paperback) 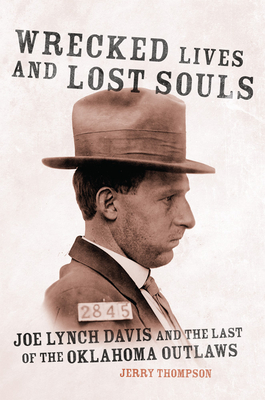 Wrecked Lives and Lost Souls: Joe Lynch Davis and the Last of the Oklahoma Outlaws (Paperback)

Growing up, Jerry Thompson knew only that his grandfather was a gritty, "mixed-blood" Cherokee cowboy named Joe Lynch Davis. That was all anyone cared to say about the man. But after Thompson's mother died, the award-winning historian discovered a shoebox full of letters that held the key to a long-lost family history of passion, violence, and despair. Wrecked Lives and Lost Souls, the result of Thompson's sleuthing into his family's past, uncovers the lawless life and times of a man at the center of systematic cattle rustling, feuding, gun battles, a bloody range war, bank robberies, and train heists in early 1900s Indian Territory and Oklahoma. Through painstaking detective work into archival sources, newspaper accounts, and court proceedings, and via numerous interviews, Thompson pieces together not only the story of his grandfather--and a long-forgotten gang of outlaws to rival the infamous Younger brothers--but also the dark path of a Cherokee diaspora from Georgia to Indian Territory. Davis, born in 1891, grew up on a family ranch on the Canadian River, outside the small community of Porum in the Cherokee Nation. The range was being fenced, and for the Davis family and others, cattle rustling was part of a way of life--a habit that ultimately spilled over into violence and murder. The story "goes way back to the wild & wooly cattle days of the west," an aunt wrote to Thompson's mother, "when there was cattle rustling, bank robberies & feuding." One of these feuds--that Joe Davis was "raised right into"--was the decade-long Porum Range War, which culminated in the murder of Davis's uncle in 1907. In fleshing out the details of the range war and his grandfather's life, Thompson brings to light the brutality and far-reaching consequences of an obscure chapter in the history of the American West.