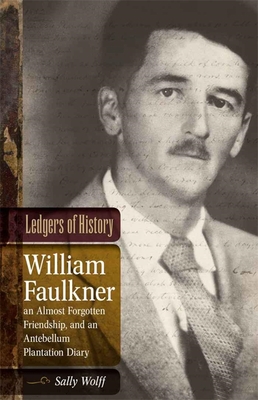 Emory University professor Sally Wolff has carried on a fifty-year tradition of leading students on expeditions to Faulkner country in and around Oxford, Mississippi. Not long ago, she decided to invite alumni on one of these field trips. One response to the invitation surprised her: I can't go on the trip. But I knew William Faulkner. They were the words of Dr. Edgar Wiggin Francisco III, and in talking with Wolff he revealed that as a child in the 1930s and 1940s he did indeed know Faulkner quite well. His father and Faulkner maintained a close friendship for many years, going back to their shared childhood, but the fact of their friendship has been unrecognized because the two men saw much less of each other after the early years of their marriages. In Ledgers of History, Wolff recounts her conversations with Dr. Francisco -- known to Faulkner as Little Eddie -- and reveals startling sources of inspiration for Faulkner's most famous works.
Dr. Francisco grew up at McCarroll Place, his family's ancestral home in Holly Springs, Mississippi, thirty miles north of Oxford. In the conversations with Wolff, he recalls that as a boy he would sit and listen as his father and Faulkner sat on the gallery and talked about whatever came to mind. Francisco frequently told stories to Faulkner, many of them oft-repeated, about his family and community, which dated to antebellum times. Some of these stories, Wolff shows, found their way into Faulkner's fiction.
Faulkner also displayed an absorbing interest in a seven-volume diary kept by Dr. Francisco's great-great-grandfather Francis Terry Leak, who owned extensive plantation lands in northern Mississippi before the Civil War. Some parts of the diary recount incidents in Leak's life, but most of the diary concerns business transactions, including the buying and selling of slaves and the building of a plantation home. During his visits over the course of decades, Francisco recalls, Faulkner spent many hours poring over these volumes, often taking notes. Wolff has discovered that Faulkner apparently drew some of the most important material in several of his greatest works, including Absalom, Absalom and Go Down, Moses, at least in part from the diary.
Through Dr. Francisco's vivid childhood recollections, Ledgers of History offers a compelling portrait of the future Nobel Laureate near the midpoint of his legendary career and also charts a significant discovery that will inevitably lead to revisions in historical and critical scholarship on Faulkner and his writings.

Sally Wolff teaches southern literature at Emory University, where she has also served as associate dean and assistant vice president. She is the author of Talking About William Faulkner: Interviews with Jimmy Faulkner and Others and coeditor of Southern Mothers: Fact and Fictions in Southern Women's Writing.