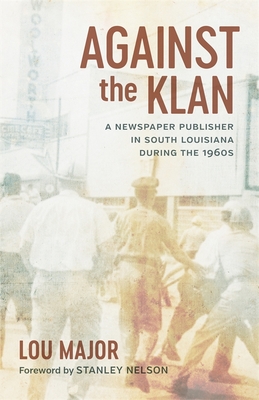 In 1964, less than one year into his tenure as publisher of the Bogalusa Daily News, New Orleans native Lou Major found himself guiding the newspaper through a turbulent period in the history of American civil rights. Bogalusa, Louisiana, became a flashpoint for clashes between African Americans advocating for equal treatment and white residents who resisted this change, a conflict that generated an upsurge in activity by the Ku Klux Klan. Local members of the KKK stepped up acts of terror and intimidation directed against residents and institutions they perceived as sympathetic to civil rights efforts. During this turmoil, the Daily News took a public stand against the Klan and its platform of hatred and white supremacy.

Against the Klan, Major's memoir of those years, recounts his attempts to balance the good of the community, the health of the newspaper, and the safety of his family. He provides an in-depth look at the stance the Daily News took in response to the city's civil rights struggles, including the many fiery editorials he penned condemning the KKK's actions and urging peaceful relations in Bogalusa. Major's richly detailed personal account offers a ground-level view of the challenges local journalists faced when covering civil rights campaigns in the Deep South and of the role played by the press in exposing the nefarious activities of hate groups such as the Klan.

Before his death in 2013, Lou Major worked at the Bogalusa Daily News and its parent company, Wick Communications, for more than fifty years. A graduate of the LSU School of Journalism, Major was inducted into the Manship School of Mass Communication's Hall of Fame in 2010. Stanley Nelson is the author of Devils Walking: Klan Murders along the Mississippi in the 1960s and the editor of the Concordia Sentinel in Ferriday, Louisiana. His investigative work at the Sentinel made him a finalist for the 2011 Pulitzer Prize in Local Reporting and has been featured in the New York Times, the Washington Post, the Los Angeles Times, and on CNN and NPR.