Give My Poor Heart Ease: Voices of the Mississippi Blues [With CD (Audio) and DVD] (Hardcover) 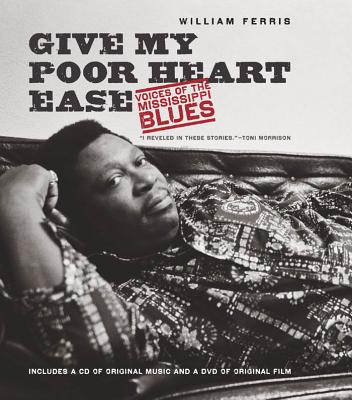 Give My Poor Heart Ease: Voices of the Mississippi Blues [With CD (Audio) and DVD] (Hardcover)


Email or call for price.
Throughout the 1960s and 1970s, folklorist William Ferris toured his home state of Mississippi, documenting the voices of African Americans as they spoke about and performed the diverse musical traditions that form the authentic roots of the blues. Now, "Give My Poor Heart Ease" puts front and center a searing selection of the artistically and emotionally rich voices from this invaluable documentary record. Illustrated with Ferris's photographs of the musicians and their communities and including a CD of original music and a DVD of original film, the book features more than twenty interviews relating frank, dramatic, and engaging narratives about black life and blues music in the heart of the American South.
Here are the stories of artists who have long memories and speak eloquently about their lives, blues musicians who represent a wide range of musical traditions--from one-strand instruments, bottle-blowing, and banjo to spirituals, hymns, and prison work chants. Celebrities such as B. B. King and Willie Dixon, along with performers known best in their neighborhoods, express the full range of human and artistic experience--joyful and gritty, raw and painful.
In an autobiographical introduction, Ferris reflects on how he fell in love with the vibrant musical culture that was all around him but was considered off limits to a white Mississippian during a troubled era. This magnificent volume illuminates blues music, the broader African American experience, and indeed the history and culture of America itself.