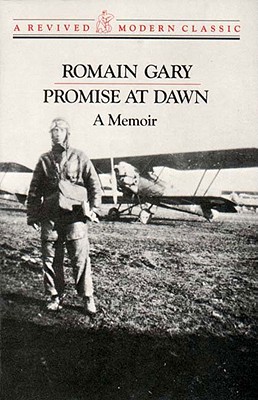 A romantic, thrilling memoir that has become a French classic.

Promise at Dawn by Romain Gary (1914-80), a classic of modern French literature, has all the earmarks of a richly romantic novel. It is all the more thrilling, therefore, to read it and know that this is not fiction but a real-life story. As a young child, Romain Gary’s mother told him that a day would come when he would have to challenge and conquer the evil demons of submission and defeat. After all, he was to be a French military hero, ambassador, noted writer, and ladies’ man . . . . Thus anticipating battle, by the time of his death he had won the Cross of the Liberation, the Croix de Guerre, the Legion of Honor, the Prix Goncourt (the last rather a comedown, as his mother had mentioned the Nobel Prize); and he had been the French consul-general in Los Angeles. Promise at Dawn begins as the story of a mother’s sacrifice. Alone and poor she fights fiercely to give her son the very best. Gary chronicles his childhood with her in Russia, Poland, and on the French Riveria. And he recounts his adventurous life as a young man fighting for France in World War II. But above all he tells the story of the love for his mother that was his very life, their secret and private planet, their wonderland "born out of a mother’s murmur into a child’s ear, a promise whispered at dawn of future triumphs and greatness, of justice and love."

Romain Gary (1914–1980) was born Roman Kacew in Vilnius to a family of Lithuanian Jews. He changed his name when he fled Nazi-occupied France to fight for the British as an RAF pilot. He wrote under several pen names and is the only writer to have received the Prix Goncourt twice. A diplomat and filmmaker, Gary was married to the American actress Jean Seberg. He died in Paris in 1980 from a self-inflicted gunshot wound.