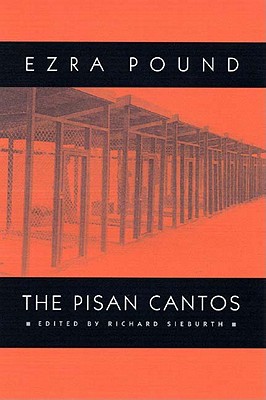 This is book number 977 in the New Directions Paperbook series.

Ezra Pound's The Pisan Cantos was written in 1945, while the poet was being held in an American military detention center near Pisa, Italy, as a result of his pro-Fascist wartime broadcasts to America on Radio Rome. Imprisoned for some weeks in a wire cage open to the elements, Pound suffered a nervous collapse from the physical and emotional strain. Out of the agony of his own inferno came the eleven cantos that became the sixth book of his modernist epic, The Cantos, themselves conceived as a Divine Comedy for our time. The Pisan Cantos were published in 1948 by New Directions and in the following year were awarded the Bollingen Prize for poetry by the Library of Congress. The honor came amid violent controversy, for the dark cloud of treason still hung over Pound, incarcerated in St. Elizabeths Hospital for the Criminally Insane. Yet there is no doubt that The Pisan Cantos displays some of his finest and most affecting writing, marking an elegaic turn to the personal while synthesizing the philosophical and economic political themes of his previous cantos. They are now being published for the first time as a separate paperback, in a fully annotated edition prepared by Richard Sieburth, who also contributes a thoroughgoing introduction, making Pound's master-work fully accessible to students and general readers.

New Directions has been the primary publisher of Ezra Pound in the U.S. since the founding of the press when James Laughlin published New Directions in Prose and Poetry 1936. That year Pound was fifty-one. In Laughlin’s first letter to Pound, he wrote: “Expect, please, no fireworks. I am bourgeois-born (Pittsburgh); have never missed a meal. . . . But full of ‘noble caring’ for something as inconceivable as the future of decent letters in the US.” Little did Pound know that into the twenty-first century the fireworks would keep exploding as readers continue to find his books relevant and meaningful.

Award-winning translator, scholar, and essayist Richard Sieburth has translated books by Henri Michaux, Friedrich Hölderlin, Louise Labé, Gérard de Nerval, and Nostradamus.
It is in The Pisan Cantos that we can approach Pound most closely as a person.

The introduction is one of the best short essays [on Pound] I have read.
— Marjorie Perloff - Boston Review