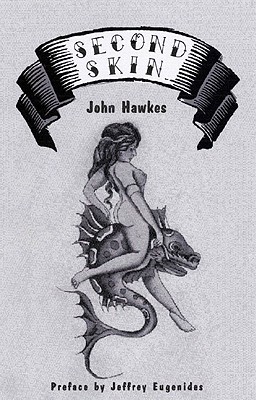 "John Hawkes is an extraordinary writer. I have always admired his books. They should be more widely read."—Saul Bellow

Skipper, an ex-World War II naval Lieutenant and the narrator of Second Skin, interweaves past and present—what he refers to as his "naked history"—in a series of episodes that tell the story of a volatile life marked by pitiful losses, as well as a more elusive, overwhelming, joy. The past: the suicides of his father, wife and daughter, the murder of his son-in-law, a brutal rape, and subsequent mutiny at sea. The present: caring for his granddaughter on a "northern" island where he works as an artificial inseminator of cows, and attempts to reclaim the innocence with which he faced the tragedies of his earlier life. Combining unflinching descriptions of suffering with his sense of beauty, Hawkes is a master of nimble and sensuous prose who makes the awful and mundane fantastic, and occasionally makes the fantastic surreal.

John Hawkes (1925–1998) was a postmodern novelist born in Stamford, Connecticut, and educated at Harvard University. He was noted for his unconventional style and views on the creation of literature and was admired by Flannery O’Connor, Robert Penn Warren, Saul Bellow, Anthony Burgess, Jeffrey Eugenides, and Donald Barthelme.