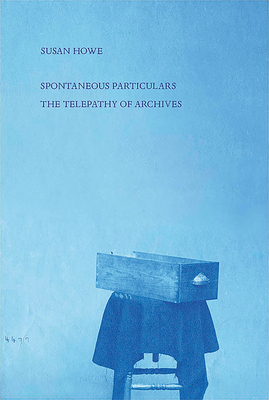 Originally a cloth coedition with the Christine Burgin Gallery, this rapturous hymn to discoveries and archives is now a paperback

Great American writers—William Carlos Williams, Jonathan Edwards, Emily Dickinson, Noah Webster, Hart Crane, Wallace Stevens, Henry James—all in the physicality of their archival manuscripts (reproduced in beautiful facsimiles here)—are the presiding spirits of Spontaneous Particulars: Telepathy of Archives. Also woven into Susan Howe’s long essay are beautiful photographs of embroideries and textiles from anonymous craftspeople. All the archived materials are links, discoveries, chance encounters, the visual and acoustic shocks of rooting around amid physical archives. These are the telepathies the bibliomaniacal poet relishes. Rummaging in the archives she finds “a deposit of a future yet to come, gathered and guarded...a literal and mythical sense of life hereafter—you permit yourself liberties—in the first place—happiness.” Digital scholarship may offer much for scholars, but Susan Howe loves the materiality of research in real archives and Spontaneous Particulars “is a collaged swan song to the old ways.”

Susan Howe has won the Bollingen Prize, the Frost Medal, and the Griffin Award. She is the author of such seminal works as Debths, That This, The Midnight, My Emily Dickinson, The Quarry, and The Birthmark.
Memorably fierce: with her long career in view today, her comment on Dickinson, in 1985, applies to Howe herself: ‘A great poet, carrying the antique imagination of her fathers, requires of each reader to leap from a place of certain signification, to a new situation, undiscovered and sovereign. She carries intelligence of the past into future of our thought by reverence and revolt.
— Langdon Hammer - The New York Review of Books

Susan Howe has often referred to herself as a ‘library cormorant’ but her extraordinary telepathy of archives is the very opposite of passive absorption: each page constructs its own ghostly skein to be woven into what becomes an increasingly mysterious figure in the carpet What begins as an archival study becomes nothing less than mesmerism.
— Marjorie Perloff