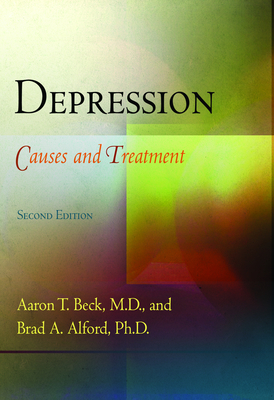 More than forty years ago, Dr. Aaron T. Beck's pioneering Depression: Causes and Treatment presented the first comprehensive account of all aspects of depression and introduced cognitive therapy to health care providers and patients struggling with one of the most common and devastating diseases of the modern age. Since that classic text first appeared, the appreciation of the multifaceted nature of mood disorders has grown, and the phenomenological and biological aspects of psychology are increasingly seen as intertwined. Taking these developments into account, Beck and his colleague Brad A. Alford have written a second edition of Depression that will help patients and caregivers understand depression as a cognitive disorder.

The new edition of Depression builds on the original research and approach of the seminal first edition, including the tests of Freud's theory that led to a new system of psychological theory and therapy, one that addresses the negative schema and automatic thoughts that can trap people in painful emotional states. Beck and Alford examine selected scientific tests and randomized controlled trials that have enhanced the cognitive approach since the time it was first introduced. Incorporating accepted changes in the definitions and categories of the various mood disorders into its discussion, Depression addresses the treatment role of revolutionary drugs, such as the selective serotonin reuptake inhibitors (SSRIs), electroconvulsive therapy (ECT), and transcranial magnetic stimulation (TMS) in relation to cognitive approaches. Beck and Alford explore research on neurotrophic and neurogenesis theories of depression. They also report on advances in psychosocial treatment of depression, including the value of cognitive therapy in the prevention of relapse.
Winner of the Albert Lasker Award in Medical Science (known as America's Nobel) and the Grawemeyer Award for Psychology, and recognized as the father of cognitive therapy, Aaron T. Beck, M.D., is University Professor Emeritus of Psychiatry at the University of Pennsylvania and President of the Beck Institute for Cognitive Therapy and Research. Brad A. Alford, Ph.D., is Professor of Psychology at the University of Scranton and coauthor with Aaron T. Beck of The Integrative Power of Cognitive Therapy and Scientific Foundations of Cognitive Theory and Therapy of Depression.