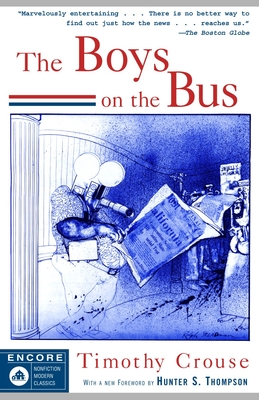 By Timothy Crouse, Hunter S. Thompson (Foreword by)
$18.00
On Our Shelves Now

Just a few of the snares lying in wait for the reporters who covered the 1972 presidential election. Traveling with the press pack from the June primaries to the big night in November, Rolling Stone reporter Timothy Crouse hopscotched the country with both the Nixon and McGovern campaigns and witnessed the birth of modern campaign journalism. The Boys on the Bus is the raucous story of how American news got to be what it is today. With its verve, wit, and psychological acumen, it is a classic of American reporting.

Timothy Crouse has been a contributing editor to Rolling Stone and The Village Voice, and the Washington columnist for Esquire, writing numerous articles for these and other publications, including The New Yorker. He translated, with Luc Brébion, Roger Martin du Gard’s Lieutenant-Colonel de Maumort. The new version of Anything Goes that he coauthored with John Weidman was staged at the Royal National Theatre in London.

Hunter S. Thompson (July 18, 1937–February 20, 2005) was an American journalist and author. He was known for his flamboyant writing style, most notably deployed in Fear and Loathing in Las Vegas, which blurred the distinctions between writer and subject, fiction and nonfiction. The best source on Thompson's writing style and personality is Thompson himself. His books include Hell's Angels: A Strange and Terrible Saga (1966), Fear and Loathing in Las Vegas: A Savage Journey to the Heart of the American Dream (1972), Fear and Loathing on the Campaign Trail ’72 (1973); The Great Shark Hunt: Strange Tales from a Strange Time (1979); The Curse of Lono (1983); Generation of Swine, Gonzo Papers Vol. 2: Tales of Shame and Degradation in the 80's (1988); and Songs of the Doomed (1990).

“All the secrets . . . the definitive story.”
—The Washington Post

“Marvelously entertaining . . . There is no better way to
find out just how the news . . . reaches us.”
—The Boston Globe