Watchman at the Gates: A Soldier's Journey from Berlin to Bosnia (American Warriors) (Hardcover) 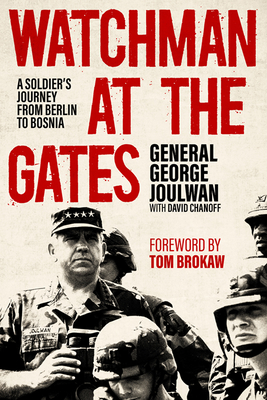 Watchman at the Gates: A Soldier's Journey from Berlin to Bosnia (American Warriors) (Hardcover)

General George Joulwan played a role in many pivotal world events during his long and exceptional career. Present at both the rise and fall of the Berlin Wall, he served multiple tours in Germany during the Cold War and two tours in Vietnam. By chance, he was recruited as Nixon's White House deputy chief of staff and witnessed the last acts of the Watergate drama first-hand. He went on to lead US Southern Command -- fighting insurgencies and the drug war in Latin America -- and was Supreme Allied Commander of NATO forces in Europe (SACEUR) during the Rwandan genocide and the Bosnian peacekeeping missions of the 1990s.

Joulwan chronicles his career in the upper echelons of the armed forces. He shares his experiences working with major military and political figures, including generals William E. DePuy, Alexander Haig, John Vessey, and Colin Powell, US ambassador Richard Holbrooke, and presidents Richard Nixon, Ronald Reagan, and Bill Clinton. Beyond the battlefield, Joulwan became an advocate for military and civilian relations during the Vietnam War, deescalating several high-intensity situations while studying at Loyola University as part of the US Army's Option C program. Watchman at the Gates merges memory and lessons in leadership as Joulwan pays tribute to his teachers and colleagues and explains the significance of their influence on his personal approach to command. As a leader of combat troops in Vietnam, he appealed to his subordinates on an individual basis, taking time to build relationships that proved vital to the effectiveness of his commands. He also reveals how similar relationships of mutual understanding were crucial in his peaceful and productive dealings with both allies and enemies.

At its heart, this inspiring memoir is a soldier's story -- written by a warrior who saw defending his country and the democratic values it stands for as his highest calling. Featuring a foreword by Tom Brokaw, Watchman at the Gates offers incredible insights into world events as well as valuable lessons for a new generation of leaders.

General George Joulwan retired from the army in 1997 as a four-star general. His career spanned thirty-six years and included roles in some of the highest leadership positions in the armed forces. Joulwan also gained teaching experience at both the United States Military Academy and Loyola University. He lives in Arlington, Virginia.David Chanoff is the author and coauthor of numerous books and articles on foreign affairs and military history, including Warrior: The Autobiography of Ariel Sharon and The Line of Fire: From Washington to the Gulf, the Politics and Battles of the New Military. He lives in Somerville, Massachusetts.