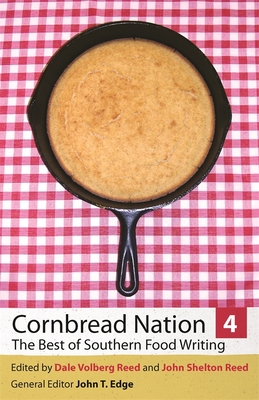 This new collection in the Southern Foodways Alliance's popular series serves up a fifty-three-course celebration of southern foods, southern cooking, and the people and traditions behind them. Editors Dale Volberg Reed and John Shelton Reed have combed magazines, newspapers, books, and journals to bring us a "best of" gathering that is certain to satisfy everyone from omnivorous chowhounds to the most discerning student of regional foodways.

After an opening celebration of the joys of spring in her natal Virginia by the redoubtable Edna Lewis, the Reeds organize their collection under eight sections exploring Louisiana and the Gulf Coast before and after hurricanes Katrina and Rita, the food and farming of the Carolina Lowcountry, "Sweet Things," southern snacks and fast foods, "Downhome Food," "Downhome Places," and a comparison of southern foods with those of other cultures.

In his "This Isn't the Last Dance," Rick Bragg recounts his experience, many years ago, of a New Orleans jazz funeral and finds hope therein that the unique spirit of New Orleanians will allow them to survive: "I have seen these people dance, laughing, to the edge of a grave. I believe that, now, they will dance back from it." "My passport may be stamped Yankee," writes Jessica B. Harris in her "Living North/Eating South," "but there's no denying that my stomach and culinary soul and those of many others like me are pure Dixie." In her "Tough Enough: The Muscadine Grape," Simone Wilson explains that the lowly southern fruit has double the heart-healthy resveratrol of French grapes, thus offering the hope of a "southern paradox." The title of Candice Dyer's brief history says it all: "Scattered, Smothered, Covered, and Chunked: Fifty Years of the Waffle House." In a photo essay, documentarian Amy Evans shows us the world of oystering along northwest Florida's Apalachicola Bay, and for the first time in the series, recipes are given-for a roux, braised collard greens, doberge cake, and other dishes.

Published in association with the Southern Foodways Alliance at the Center for the Study of Southern Culture at the University of Mississippi. A Friends Fund Publication.

"From a fascinating oral history of Paul Prudhomme's contributions to the cuisine of Louisiana to a lovely essay in praise of pork rinds (complete with a list of appropriate wine pairings!), this book offers all the proof I need that Cornbread Nation is by far the best place in the world to live."--Julia Reed, author of Queen of the Turtle Derby and Other Southern Phenomena

"The writers in Cornbread Nation 4 form a patchwork quilt of voices celebrating the rich and varied heritage that is southern cooking."--Scott Peacock, Executive Chef of Watershed Restaurant and recipient of the James Beard Award for Best Chef Southeast