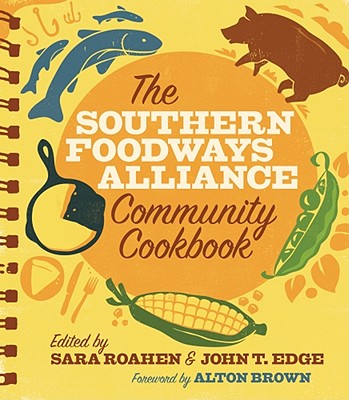 Everybody has one in their collection. You know—one of those old, spiral- or plastic-tooth-bound cookbooks sold to support a high school marching band, a church, or the local chapter of the Junior League. These recipe collections reflect, with unimpeachable authenticity, the dishes that define communities: chicken and dumplings, macaroni and cheese, chess pie. When the Southern Foodways Alliance began curating a cookbook, it was to these spiral-bound, sauce-splattered pages that they turned for their model. Including more than 170 tested recipes, this cookbook is a true reflection of southern foodways and the people, regardless of residence or birthplace, who claim this food as their own. Traditional and adapted, fancy and unapologetically plain, these recipes are powerful expressions of collective identity. There is something from—and something for—everyone. The recipes and the stories that accompany them came from academics, writers, catfish farmers, ham curers, attorneys, toqued chefs, and people who just like to cook—spiritual Southerners of myriad ethnicities, origins, and culinary skill levels. Edited by Sara Roahen and John T. Edge, written, collaboratively, by Sheri Castle, Timothy C. Davis, April McGreger, Angie Mosier, and Fred Sauceman, the book is divided into chapters that represent the region’s iconic foods: Gravy, Garden Goods, Roots, Greens, Rice, Grist, Yardbird, Pig, The Hook, The Hunt, Put Up, and Cane. Therein you’ll find recipes for pimento cheese, country ham with redeye gravy, tomato pie, oyster stew, gumbo z’herbes, and apple stack cake. You’ll learn traditional ways of preserving green beans, and you’ll come to love refried black-eyed peas. Are you hungry yet?

Published in association with the Southern Foodways Alliance at the Center for the Study of Southern Culture at the University of Mississippi. A Friends Fund Publication.

Sara Roahen is an oral historian and the author of "Gumbo Tales: Finding My Place at the New Orleans Table." She has written for "Tin House" and "Food & Wine." John T. Edge is director of the Southern Foodways Alliance and "Cornbread Nation" general editor. He is the author or editor of more than a dozen books, including "The New Encyclopedia of Southern Culture: Foodways" and "A Gracious Plenty: Recipes and Recollections from the American South." Edge contributes to a wide array of publications, including the "New York Times," "Oxford American," and "Garden & Gun." www.johntedge.com. The Southern Foodways Alliance documents, studies, and celebrates the diverse food cultures of the changing American South. It is a member-supported organization of more than 1,000 cooks, thinkers, academics, writers, and eaters. "Atlantic Monthly" called the SFA "this country's most intellectually engaged (and probably most engaging) food society." www.southernfoodways.org.

"It's as much Americana as cookbook, an effort to preserve a vanishing part of our culture. Either way, it's an instant classic."—Time

"The Southern Foodways Alliance Community Cookbook is a tribute to standards of the Southern table as well as a showcase for the delicious handiwork of some notable contemporary chefs." —Atlanta Journal-Constitution

“Each page herein delivers a strong sense of community; the contributions are from real people with real names; the collection is democratic, but with nary a sign of culinary chaos; and the food is just plain good. And here’s the best part, as far as I’m concerned: Regardless of whether it looks back into the past or ahead into the future, this book looks ever Southward.”—Alton Brown, from the foreword

“So why are we excited about yet another Southern cookbook? By sourcing recipes from spiral-bound community cookbooks and then testing and adapting them for modern kitchens, this collection of recipes has the potential to become the standard reference on the topic. Add to that the research power of the Southern Foodways Alliance and its director John T. Edge, and this book could be unstoppable." —Eater.com

"Includes of plenty of genuinely new and genuinely Southern food to prove that it's still a living, breathing cuisine."--Nashville Scene