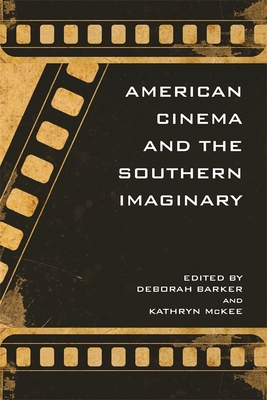 Employing innovations in media studies, southern cultural studies, and approaches to the global South, this collection of essays examines aspects of the southern imaginary in American cinema and offers fresh insight into the evolving field of southern film studies.

In their introduction, Deborah Barker and Kathryn McKee argue that the southern imaginary in film is not contained by the boundaries of geography and genre; it is not an offshoot or subgenre of mainstream American film but is integral to the history and the development of American cinema. Ranging from the silent era to the present and considering Hollywood movies, documentaries, and independent films, the contributors incorporate the latest scholarship in a range of disciplines. The volume is divided into three sections: "Rereading the South" uses new critical perspectives to reassess classic Hollywood films; "Viewing the Civil Rights South" examines changing approaches to viewing race and class in the post-civil rights era; and "Crossing Borders" considers the influence of postmodernism, postcolonialism, and media studies on recent southern films. The contributors to American Cinema and the Southern Imaginary complicate the foundational term "southern," in some places stretching the traditional boundaries of regional identification until they all but disappear and in others limning a persistent and sometimes self-conscious performance of place that intensifies its power.

Deborah Barker (Editor) DEBORAH BARKER is an associate professor of English at the University of Mississippi. She is the author of Aesthetics and Gender in American Literature: The Portrait of the Woman Artist and coeditor of Shakespeare and Gender: A History. Kathryn McKee (Editor) KATHRYN McKEE is the McMullan Associate Professor of Southern Studies and English at the University of Mississippi. She has published in a range of journals, including American Literature, Legacy, Mississippi Quarterly, and Southern Literary Journal.

“Deborah Barker and Kathryn McKee’s American Cinema and the Southern Imaginary draws the imagined South brilliantly and broadly, as a set of images, sounds, and narratives that help produce an American cinema and as a reservoir for values in need of salvage or denial and contradictions in need of resolution. Placing the New Southern Studies in conversation with film studies, this book is simply the best edited collection available on film and the U.S. South.”—Grace Hale, associate professor of history and American studies, University of Virginia

“Besides adeptly taking on concepts and questions circulating in the field, American Cinema and the Southern Imaginary intervenes in new exciting ways, “rereading the South” (old, new and postmodern) and insightfully interrogating the South on film, from Birth of a Nation to “Birmingham Sunday,” Slacker and beyond. This deft anthology makes great reading for anyone wanting to understand the development of the cinematic South; for an educated general audience, as well as graduate courses in cinema studies and American studies.”—Ed Guerrero, associate professor of cinema studies and Africana studies, New York University

“With essays dealing with everything from True Blood and Slackers to the "watermelon pictures" of very early cinema, this is not your hippie aunt's "Southern Imaginary." Edgy yet teachable, with essays by many of the best younger scholars in the field, Barker and McKee's landmark collection reminds us why "the South" remains central to the Hollywood—and indie—imaginary.”—Jon Smith, coeditor of Look Away! The U.S. South in New World Studies

“Holding a copy of American Cinema and the Southern Imaginary inspires the feeling of receiving something long overdue. . . . The editors and essayists responsible for this thoroughly impressive collection have made an invaluable contribution to the ongoing effort to revise and expand possibilities for bringing representations of the South into illuminating focus.”—Ted Atkinson, Journal of Southern History