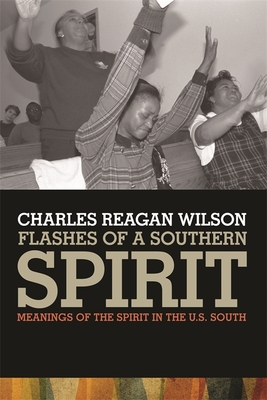 By Charles Reagan Wilson
$29.95
On Our Shelves Now

Flashes of a Southern Spirit explores meanings of the spirit in the American South, including religious ecstasy and celebrations of regional character and distinctiveness.

Charles Reagan Wilson sees ideas of the spirit as central to understanding southern identity. The South nurtured a patriotic spirit expressed in the high emotions of Confederates going off to war, but the region also was the setting for a spiritual outpouring of prayer and song during the civil rights movement. Arguing for a spiritual grounding to southern identity, Wilson shows how identifications of the spirit are crucial to understanding what makes southerners invest so much meaning in their regional identity. From the late nineteenth-century invention of southern tradition to early twenty-first-century folk artistic creativity, Wilson examines a wide range of cultural expression, including music, literature, folk art, media representations, and religious imagery. He finds new meanings in the works of such creative giants as William Faulkner, Richard Wright, and Elvis Presley, while at the same time closely examining little-studied figures such as the artist/revivalist McKendree Long. Wilson proposes that southern spirituality is a neglected category of analysis in the recent flourishing of interdisciplinary studies on the South--one that opens up the cultural interaction of blacks and whites in the region.

"Wilson has been one of the founders, promoters, and premier practitioners of southern studies: a multidisciplinary approach to the place or state of mind we call the South. Collected here under the umbrella of what he terms ‘southern spirit’ are some of his best essays, with discussions of southerners both famous and forgotten, gospel music, high literature, and self-taught art, all connected through Wilson’s deft understanding of the complicated role of religious experience in shaping and being shaped by southern culture."—Charles A. Israel, author of Before Scopes: Evangelicalism, Education, and Evolution in Tennessee, 1870–1925

"This well-composed and gracefully written volume addresses the cultural history of the American South, especially in its expressions of a distinctive 'southern spirit.' The essays collected here are a testament to a compelling vision of that spirit . . . No one has done more to define and promote cultural studies of the American South than Charles Reagan Wilson."—Journal of Southern Religion


"To Wilson, the South is spiritually rich, but neglected analytically, and a closer examination of the cultural interaction of Blacks and whites in the region will bring that spirituality to light."—Book News

"Charles Reagan Wilson is among the four or five most important historians of religion in the American South. Along with Wilson's direct contributions to our understanding of southern religion and culture, his work on historical methodology and interpretation have been vital, as seen in his book Baptized in Blood, a canonical work in southern religion. The essays collected here explore and extend both of these aspects of Wilson's scholarship and are of immense value to scholars and students of the American South and American religion."—Joe Creech, author of Righteous Indignation: Religion and the Populist Revolution