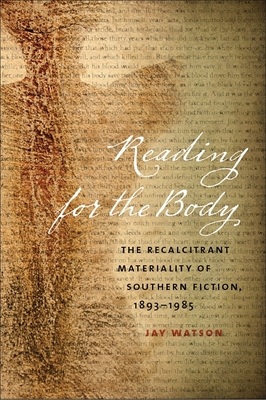 Jay Watson argues that southern literary studies has been overidealized and dominated by intellectual history for too long. In Reading for the Body, he calls for the field to be rematerialized and grounded in an awareness of the human body as the site where ideas, including ideas about the U.S. South itself, ultimately happen.

Employing theoretical approaches to the body developed by thinkers such as Karl Marx, Colette Guillaumin, Elaine Scarry, and Friedrich Kittler, Watson also draws on histories of bodily representation to mine a century of southern fiction for its insights into problems that have preoccupied the region and nation alike: slavery, Jim Crow, and white supremacy; the marginalization of women; the impact of modernization; the issue of cultural authority and leadership; and the legacy of the Vietnam War. He focuses on the specific bodily attributes of hand, voice, and blood and the deeply embodied experiences of pain, illness, pregnancy, and war to offer new readings of a distinguished group of literary artists who turned their attention to the South: Mark Twain, Jean Toomer, Zora Neale Hurston, William Faulkner, Richard Wright, Katherine Anne Porter, Bobbie Ann Mason, and Walker Percy. In producing an intensely embodied U.S. literature these writers, Watson argues, were by turns extending and interrogating a centuries-old tradition in U.S. print culture, in which the recalcitrant materiality of the body serves as a trope for the regional alterity of the South. Reading for the Body makes a powerful case for the body as an important methodological resource for a new southern studies.
Jay Watson is the Howry Professor of Faulkner Studies and Professor of English at the University of Mississippi. He is the author of "Forensic Fictions: The Lawyer Figure in Faulkner" (Georgia) and editor of "Conversations with Larry Brown" and "Faulkner and Whiteness."