Too Many Pumpkins (Paperback) 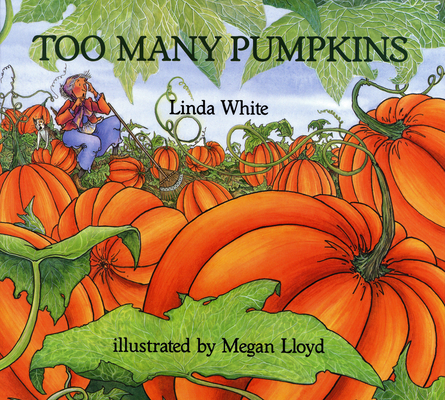 Too Many Pumpkins (Paperback)


Usually Arrives in Store in 1-5 Days
What can you do with too many pumpkins?

Rebecca Estelle has hated pumpkins ever since she was a girl when pumpkins were often the only food her family had. When an enormous pumpkin falls off a truck and smashes in her yard, she shovels dirt over the pieces and forgets about them. But those slimy pumpkin smithereens sprout up in autumn, and Rebecca Estelle finds a sea of pumpkins in her garden.

A heartwarming classic for more than twenty years, this story shows what happens when one thrifty gardener figures out how to make other people happy with the squash she can't stomach.

Filled with colorful illustrations from a season of gardening, this is a perfect book for young gardeners and pumpkin lovers. Its wonderful lesson about helping others can be appreciated in the classroom or at home.
Linda White is the author of Too Many Pumpkins and Too Many Turkeys. Ms. White lives in Colorado.

Megan Lloyd has illustrated many fine books for children, including "Too Many Pumpkins" by Linda White and "The Gingerbread Man" by Eric A. Kimmel. She lives on a farm in central Pennsylvania with her husband.
"Rebecca Estelle hates pumpkins. "What's not to like?" you may be thinking. Certainly, pumpkins are benign, as far as gourds go, and they make for delicious pies. But if you were forced to eat only pumpkins (baked, steamed, boiled, stewed, mashed, and rotten), you might agree with Rebecca, who was so poor as a child that she could only afford to eat the unrelentingly orange squash.

One day, years and years later, white-haired Rebecca was busy not eating pumpkins when--SPLAT--a giant pumpkin fell off an overloaded truck and smashed into her yard. She buried the mess so she wouldn't have to look at it, and, as you might imagine, she witnessed a bumper crop the following fall. In Too Many Pumpkins, a 1996 American Bookseller "Pick of the Lists," Linda White (who based the book on her own pumpkin-eating aunt Becky) reveals how swallowing one's personal (pumpkin) prejudices can end up benefiting a whole community. Illustrator Megan Lloyd creates spunky, detail-rich drawings that are sure to hold up to the scrutiny of youngsters everywhere. This is an ideal Halloween-time book for those who want to bypass ghouls and goblins (or any actual mention of Halloween) and focus on ... pumpkins! (Ages 4 to 8)" —Amazon.com Review


"Golden autumn hues cast their warm glow throughout this humorous harvest tale. Rebecca Estelle, having survived on various pumpkin dishes during her poor childhood, hates them so much that when a pumpkin accidentally falls into her yard, she shovels dirt over it so she won't have to see or think about it again. In spite of all her efforts to the contrary, she is "rewarded" with a yard full of bright orange globes the following fall. Not willing to let the windfall go to waste, she once again prepares the dishes she detested as a child, carves jack-o-lanterns from the remaining pile, and then thoroughly enjoys the fellowship of her neighbors lured by the glow of the mischievous carvings. And, of course, Rebecca Estelle saves seeds for next year's planting. Lloyd snuggles White's text into her rich watercolor-and-pen illustrations. Nature's determined bounty spills from formal borders and is tinged with just the right touch of realism to contrast with the cartoonlike Rebecca Estelle and her feline companion. The vocabulary and sentence structure calls for solid independent readers, but the large horizontal format packed with engaging fun makes this title an ideal harvest/Halloween read-aloud." —School Library Journal