Houdini and Me (Hardcover) 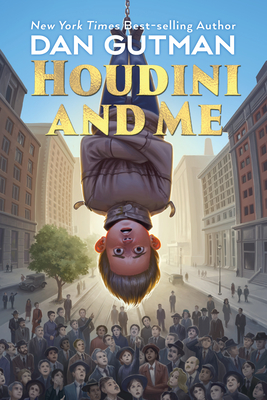 Houdini and Me (Hardcover)

“Eleven-year-old Harry is obsessed with Harry Houdini. In fact, Harry lives in the house the real Houdini lived in while in New York. When Harry is given an old flip-phone on his birthday, he starts receiving text messages from someone claiming to be the real Houdini contacting Harry from the other side. Is he really Houdini? Is this some sort of prank? Does he really want to change bodies with Harry? What would happen if they do swap bodies? Would Harry be trapped in 1921? A fascinating read for all fans of magic and Houdini.”
— Pat Trotter, Bookends On Main, Menomonie, WI

Harry has always admired the famous escape artist Houdini. And when Houdini asks for help in coming back to life, it seems like an amazing chance...or could it be Houdini's greatest trick of all?

Eleven-year-old Harry Mancini is NOT Harry Houdini--the famous escape artist who died in 1926. But Harry DOES live in Houdini's old New York City home, and he definitely knows everything there is to know about Houdini's life. What is he supposed to do, then, when someone starts texting him claiming that they're Houdini, communicating from beyond the grave? Respond, of course.

It's hard for Harry to believe that Houdini is really contacting him, but this Houdini texts the secrets to all of the escape tricks the dead Houdini used to do. What's more, Houdini's offering Harry a chance to go back in time and experience it for himself. Should Harry ignore what must be a hoax? Or should he give it a try and take Houdini up on this death-defying offer?

Dan Gutman is the award-winning author of series including My Weird School, The Genius Files, and the baseball card series, including Honus & Me. He uses his writing powers for good once again in this exciting new middle grade novel.

Named a New York State Great Read by the Empire State Center for the Book!
Dan Gutman grew up in New Jersey loving sports, which inspired him as an adult to write his baseball card book series, that begins with Honus & Me, which was nominated for eleven state awards and adapted for television. Other titles of his include the My Weird School series, The Genius Files series, The Kid Who Ran for President, and much more. He lives with his wife and two kids in New York City. Houdini and Me is Dan's first title with Holiday House.
"magic is at the heart of Dan Gutman’s new middle grade novel, Houdini and Me. . . . Gutman writes with a strong sense of place, and includes pictures of Morningside Heights along with the Houdini photos, so even non-New Yorkers will come away with a feel for the neighborhood and its charms"—The New York Times

"[H]umor and tension make this an appealing page-turner. . . . Funny, scary in the right moments, and offering plenty of historical facts." —Kirkus Reviews

"With quick writing and dialogue and fun facts about Houdini, this is an enjoyable read, especially for those interested in Houdini’s life or magic." —School Library Journal

"Gutman (the My Weird School series) touches on profound topics through Harry’s chatty narration, such as the boy’s yearning for his late father. Interspersed with New York City facts and photographs of Houdini, this entertaining story ends, appropriately, with a touch of magic." —Publishers Weekly

"an amusing adventure that may well entice readers to further Houdini investigation." —The Bulletin of the Center for Children’s Books