The Secret of the Hidden Scrolls: The Shepherd’s Stone, Book 5 (Paperback) 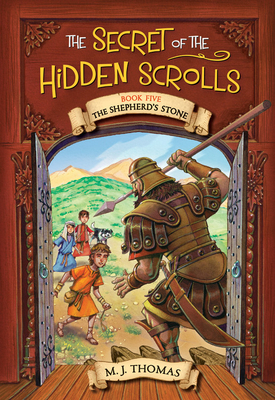 The Secret of the Hidden Scrolls: The Shepherd’s Stone, Book 5 (Paperback)


Usually Arrives in Store in 1-5 Days
When the Hidden Scrolls hurtle siblings Peter and Mary back in time, they wind up in the middle of David and Goliath's epic battle.

The Secret of the Hidden Scrolls series follows siblings Peter and Mary and their dog, Hank, as they discover ancient scrolls that transport them back to key moments in biblical history.

In the series' fifth installment, the time-traveling trio wind up in Bethlehem, where they quickly befriend a young David. When David brings food to the Israelite army, Peter and Mary go with him and witness the mighty taunts of the giant Goliath. As the clock runs out, Peter and Mary uncover a treacherous plot, help David prepare to face Goliath, and battle a mischievous and familiar enemy. Children will be on the edge of their seats as the larger-than-life story of David and Goliath hurtles to a close.
Mike Thomas grew up in Florida playing sports and riding his bike to the library and an arcade named the Cosmic Cowboy. He graduated from Liberty University, earning a bachelor's degree in Bible Studies. When his son Peter was nine years old, Mike went searching for books that would teach Peter about the Bible in a fun, imaginative way. Finding none, he decided to write his own series. Mike Thomas lives in Murfreesboro, Tennessee, with his wife, Lori; sons Payton and Peter; and their dog, Hank.