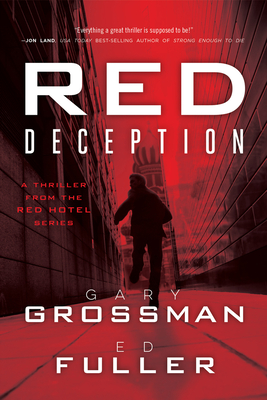 
Usually Arrives in Store in 1-5 Days
Intelligence experts and thriller authors concur: Red Deception is “A page-turner by authors who might as well sit on the National Security Council.” When terrorists bomb bridges across the country and threaten the Hoover Dam, the vulnerability of America’s infrastructure becomes a matter of national security. But Dan Reilly, a former Army intelligence officer, predicted the attacks in a secret State Department report written years earlier—a virtual blueprint for disaster, somehow leaked and now in the hands of foreign operatives. With Washington distracted by domestic crises, Russian President Nicolai Gorshkov sends troops to the borders of Ukraine and Latvia, ready to reclaim what he feels is Russia’s rightful territory. Tensions in Europe threaten to boil over as a besieged American president balances multiple crises that threaten to upend the geopolitical order. With the US at the mercy of an egomaniacal leader, and reporters and covert agents on his tail, Reilly may be the one man who can connect the dots before an even bigger catastrophe unfolds. Red Deception is the second book in the Red Hotel series.
Gary Grossman's first novel, Executive Actions, propelled him into the world of geopolitical thrillers. Executive Treason, Executive Command, and Executive Force further tapped Grossman’s experience as a journalist, newspaper columnist, documentary television producer, reporter, and media historian. In addition to the bestselling Executive series, Grossman wrote the international award-winning Old Earth, a geological thriller that spans all of time. With Red Hotel and Red Deception, his collaborations with Ed Fuller, Grossman entered a new realm of globe-hopping thriller writing. Ed Fuller is a hospitality industry leader, educator, and bestselling author. He is president of Irvine, California-based Laguna Strategic Advisors, a global consortium that provides business consulting services to corporations and governments. Fuller is also director of the FBI National Academy Associates (FBINAA). The plots for Red Hotel and Red Deception draw heavily on his experience and exploits.
"Forget 'ripped from the headlines,' because RED DECEPTION threatens to write its own! RED DECEPTION is everything a great thriller is supposed to be! High stakes, incredible action scenes, a deadly plot, and a dynamic hero in Dan Reilly. Gary Grossman and Ed Fuller have crafted a relentlessly riveting tale that hones in on our greatest fears and takes us right to the brink in breathless fashion." —Jon Land, USA Today best-selling author

“RED DECEPTION provides an in-depth and realistic ground level view of the type of asymmetric Nation-state sponsored threats faced by the Agencies tasked with protecting the United States both domestically and abroad. Thoroughly researched with thrilling pacing, it follows a worst case scenario with the resulting fallout and a complex investigation that unfolds all over the Globe.” —Edward Bradstreet, Special Agent, Department of Homeland Security Homeland Security Investigations (HSI)

“Besides keeping us on the edge of our seats, RED DECEPTION is so prescient, filled with deep insights into the real worlds of espionage and politics, while giving us a window that sheds light onto the darkest aspects of political intrigue and human nature.” —Barry Kibrick, Host of national PBS series, Between the Lines

“RED DECEPTION delivers another loud wake-up call that rang so true in RED HOTEL…Fuller and Grossman take us even further into the new Cold War that shows every sign of turning RED hot. Reading RED DECEPTION shows us how fast the map of the world could change yet again!” —Roger Dow President and CEO, US Travel Association

"The authors keep the multiple plot lines moving swiftly ahead with rapid scene shifts, and the behind-the-scenes look at the high-end international hotel world lends authenticity...Hopefully, he’ll be back soon for more adventures." —Publishers Weekly