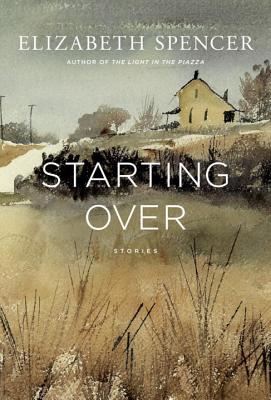 By Elizabeth Spencer
Special Order -- Email or Call for Availability

Elizabeth Spencer’s Light in the Piazza was published three years before I was born, more than six decades ago. She will be here February 03 with Starting Over, a sparkling collection of nine short stories, the genre in which the Carrollton, Mississippi native “is a rare, true master,” according to Richard Ford. She has published five previous story collections along with her nine novels. The stories of Starting Over, which she began to write not long after her husband’s passing ten years ago, delve into the shuttered mysteries of human relations, and they are brilliant and fresh.

One of the masters of American short fiction—author of The Light in the Piazza—returns with a new collection of stories.

On the release of her first novel in 1948, Elizabeth Spencer was immediately championed by Robert Penn Warren and Eudora Welty, setting off a remarkable career as one of the great literary voices of the American South. Her career, now spanning seven decades, continues here with nine new stories. In Starting Over, Spencer returns to the deep emotional fault lines and unseen fractures that lie just beneath the veneer of happy family life. In “Sightings,” a troubled daughter suddenly returns to the home of the father she accidently blinded during her parents’ bitter separation; in “Blackie,” the reappearance of a son from a divorcee’s first marriage triggers a harrowing confrontation with her new family; while in “The Wedding Visitor,” a cousin travels home only to find himself entwined in the events leading up to a family wedding. In these nine stories, Spencer excels at revealing the flawed fabric of human relations.

Winner of the PEN/Malamud prize and five O. Henry awards, Elizabeth Spencer (1921—2019) was the author of nine novels, six short story collections, a memoir, and a play.

There seems to be nothing this extraordinary writer can’t do… Spencer recounts the details and doings of her characters in such spare, unfussy, almost conversational prose that she sounds at first like nothing so much as a shrewd family storyteller…. Spencer’s great gift is her ability to take ordinariness and turn it inside out, to find focus in a muddle…Dazzling…a work of genius.
— Malcolm Jones - New York Times Book Review

Spencer has a special gift for the nuances in “ordinary” human relationships; she creates suspense via anticipation more than through interactions themselves…. Spencer’s strength lies in highlighting human truths in captured moments.
— Publishers Weekly

Spencer’s elegant stories are more about what doesn’t happen than what does…. Quiet and spare prose ferries tiny but explosive clues which point to powerful insights lurking between the lines…. In Spencer’s world, the emotional debt ceiling is always on the rise.
— Kirkus Reviews

Spencer’s first work of fiction, a novel titled Fire in the Morning, was published in 1948, and, as affirmed by her new collection of short fiction, these many years have not dulled the sharpness of her prose nor inched her into out-of-date perceptions of the world. Grand dame of southern letters that Spencer is, she remains a vital, passionate, contemporary-issues writer. [These stories] show the control and ease of a master; each story has superb qualities of artistry and social relevance.

Spencer [is] an elegant and subtle writer.… Like Chekhov, the moments of most acute misery—those achingly common things that nearly kill us all—are offstage.… There are nine stories here, all wonderful, subtle and complex—which makes the cumulative effect all the more alarming.
— Ann Beattie - San Francisco Chronicle

Spencer’s stories dance with the illusion of happiness but swell with unspoken sadness. Humor bubbles to the surface in the most unexpected ways …but that humor, too, is fragile….Starting Over is a veritable Whitman’s sampler of bite-sized stories stitched together by their shared stillness.

She is, as she ever was, one of America’s best short story writers, with her invention and craft undimmed. Next time they bring out Spencer’s Selected Fiction they will have to wedge in at least two more masterpieces from Starting Over…