Who Should Pay?: Higher Education, Responsibility, and the Public (Paperback) 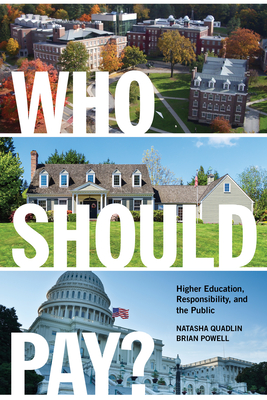 Who Should Pay?: Higher Education, Responsibility, and the Public (Paperback)


Email or call for price.
Americans now obtain college degrees at a higher rate than at any time in recent decades in the hopes of improving their career prospects. At the same time, the rising costs of an undergraduate education have increased dramatically, forcing students and families to take out often unmanageable levels of student debt. The cumulative amount of student debt reached nearly $1.5 trillion in 2017, and calls for student loan forgiveness have gained momentum. Yet public policy to address college affordability has been mixed. While some policymakers support  more public funding to broaden educational access, others oppose this expansion. Noting that public opinion often shapes public policy, sociologists Natasha Quadlin and Brian Powell examine public opinion on who should shoulder the increasing costs of higher education and why.

Who Should Pay? draws on a decade’s worth of public opinion surveys analyzing public attitudes about whether parents, students, or the government should be primarily responsible for funding higher education. Quadlin and Powell find that between 2010 and 2019, public opinion has shifted dramatically in favor of more government funding. In 2010, Americans overwhelming believed that parents and students were responsible for the costs of higher education. Less than a decade later, the percentage of Americans who believed that federal or state/local government should be the primary financial contributor has more than doubled. The authors contend that the rapidity of this change may be due to the effects of the 2008 financial crisis and the growing awareness of the social and economic costs of high levels of student debt. Quadlin and Powell also find increased public endorsement of shared responsibility between individuals and the government in paying for higher education. The authors additionally examine attitudes on the accessibility of college for all, whether higher education at public universities should be free, and whether college is worth the costs.

Quadlin and Powell also explore why Americans hold these beliefs. They identify individualistic and collectivist world views that shape public perspectives on the questions of funding, accessibility, and worthiness of college. Those with more individualistic orientations believed parents and students should pay for college, and that if students want to attend college, then they should work hard and find ways to achieve their goals. Those with collectivist orientations believed in a model of shared responsibility – one in which the government takes a greater level of responsibility for funding education while acknowledging the social and economic barriers to obtaining a college degree for many students. The authors find that these belief systems differ among socio-demographic groups and that bias – sometimes unconscious and sometimes deliberate – regarding race and class affects responses from both individualistic and collectivist-oriented participants.

Public opinion is typically very slow to change. Yet Who Should Pay? provides an illuminating account of just how quickly public opinion has shifted regarding the responsibility of paying for a college education and its implications for future generations of students.

NATASHA QUADLIN is an assistant professor of sociology at the University of California, Los Angeles.


“Sociologists Natasha Quadlin and Brian Powell take us on a well-reasoned, accessible, and engaging journey of how public opinion has changed over time regarding college access and paying for it. Their findings suggest a cultural shift in the American mindset about higher education inequality, and Who Should Pay? merits a strong read to learn what it is and why.”


“One of the most pressing issues of today is whether a public college education should be free for every eligible high school graduate, and if so, how will it be funded? This provocative book based on over a thousand adults contacted before and during the pandemic discusses how public views of access and funding of higher education have changed. Addressing problems of individual versus collective interests, this excellent volume raises questions regarding our commitment to future generations of youth, democratic values, and American productivity.”


“Who Should Pay? reminds us that public opinion about the value of a college education and about its beneficiaries has changed rapidly in the last decade. What appeared to be out of the question in one moment becomes possible in another. This book shows us why.  If the public is changing in its attitudes toward whether students should have access to free, or at least affordable, tuition, how might our public policies respond? And for those who seem to oppose ‘free tuition,’ what are some of the surprising reasons why they do so and how malleable are their positions? For anyone following the debates on college affordability or the cancel student debt proposals, this book is a must read.”