Wilful Blindness, How a network of narcos, tycoons and CCP agents Infiltrated the West (Paperback) 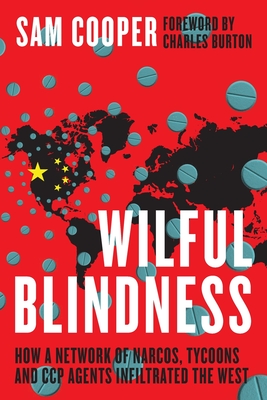 Wilful Blindness, How a network of narcos, tycoons and CCP agents Infiltrated the West (Paperback)

In 1982 three of the most powerful men in Asia met in Hong Kong. They would decide how Hong Kong would be handed over to the People's Republic of China and how Chinese business tycoons Henry Fok and Li Ka-Shing would help Deng Xiaoping realize the Chinese Communist Party's domestic and global ambitions. That meeting would not only change Vancouver but the world. Billions of dollars in Chinese investment would soon reach the shores of North America's Pacific coast. B.C. government casinos became a tool for global criminals to import deadly narcotics into Canada and launder billions of drug cash into Vancouver real estate. And it didn't happen by accident. A cast of accomplices - governments hungry for revenue, casino, and real estate companies with ties to shady offshore wealth, professional facilitators including lawyers and bankers, an aimless RCMP that gave organized crime room to grow - all combined to cause this tragedy. There was greed, folly, corruption, conspiracy, and wilful blindness.

Decades of bad policy allowed drug cartels, first and foremost the Big Circle Boys - powerful transnational narco-kingpins with ties to corrupt Chinese officials, real estate tycoons, and industrialists - to gain influence over significant portions of Canada's economy. Many looked the other way while B.C.'s primary industry, real estate, ballooned with dirty cash. But the unintended social consequences are now clear: a fentanyl overdose crisis raging in major cities throughout North America and life spans falling for the first time in modern Canada, and a runaway housing market that has devastated middle-class income earners. This story isn't just about real estate and fentanyl overdoses, though. Sam Cooper has uncovered evidence that shows the primary actors in so-called "Vancouver Model" money laundering have effectively made Canada's west coast a headquarters for corporate and industrial espionage by the CCP. And these ruthless entrepreneurs have used Vancouver and Canada to export their criminal model to other countries around the world including Australia and New Zealand. Meanwhile, Cooper finds that the RCMP's 2019 arrest of its top intelligence official, Cameron Ortis, raises many frightening questions. Could Chinese transnational criminals and state actors targeting

Canada's industrial and technological crown jewels have gained protection from the Mounties? Could China and Iran have insight into Canada's deepest national security secrets and influence on investigations? Ortis had oversight of many investigations into transnational money laundering networks and insight into sensitive probes of suspects seeking to undermine Canada's democracy and infiltrate the United States, according to the evidence Cooper has found.

Wilful Blindness is a powerful narrative that follows the investigators who refused to go along with institutionalized negligence and corruption that enabled the Vancouver Model, with Cooper drawing on extensive interviews with the whistle-blowers; thousands of pages of government and court documents obtained through legal applications; and large caches of confidential material available exclusively to Cooper.

The book culminates with a shocking revelation showing how deeply Canada has been compromised, and what needs to happen, to get the nation back on track with its "Five Eyes" allies.