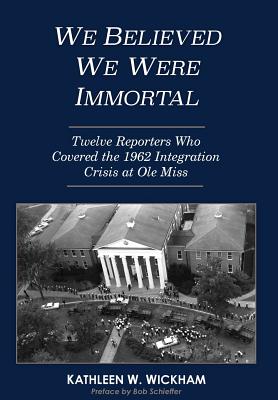 By Kathleen Wickham, Bob Schieffer (Preface by)
$29.95
On Our Shelves Now

On September 30, 1962, the nation was transfixed over the integration crisis at the University of Mississippi as James Meredith sought to become the first African-American to enroll in any public school in Mississippi. More than 300 reporters descended on the small town of Oxford. Before dawn a reporter would be murdered and 30,000 troops called in to quell a riot. Kathleen Wickham details the challenges faced by reporters to get their stories followed by the original reports they filed. She examines the still-unsolved murder of French reporter Paul Guihard and offers theories on the circumstances around his death. The FBI's list of 300+ reporters and their journals or TV/radio stations is included.
The twelve reporters covered in the book Include Claude Sitton of The New York Times; Sidna Brower, the Ole Miss student newspaper editor who stood-up to her peers in editorials calling for calm; and Moses Newsom, who was barred from covering the story because of his race. Featured also are CBS reporter Dan Rather, Michael Dorman of Newsday, photographer Flip Schulke, Fred Powledge of the Atlanta Journal, Texas videographer Gordon Yoder, NBC reporter Richard Valeriani, Dorothy Gilliam of The Washington Post and Neal Gregory of the Memphis Commercial Appeal, and Agence France-Presse reporter Paul Guihard, who was murdered on campus. In his preface CBS journalist Bob Schieffer writes, "There have been many heroes in this long struggle, and Kathleen Wickham gives long-deserved credit to twelve men and women who risked their lives to tell the story."