To Kill the Irishman: The War That Crippled the Mafia (Hardcover) 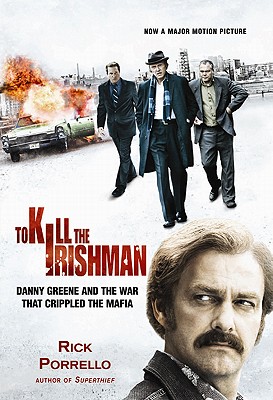 To Kill the Irishman: The War That Crippled the Mafia (Hardcover)

Basis for the motion picture Kill the Irishman with Ray Stevenson, Vincent D'Onofrio, Val Kilmer & Christopher Walken. The the true story of fearless Irish-American racketeer Danny Greene, the Irishman who takes on the mob in a 1970s bombing war. The end result is the fall of several Mafia families and the defection of high-ranking mobsters.

Rick Porrello wears several hats. He is a Cleveland area police chief, jazz drummer and author of several non-fiction books. He began writing his first book, "The Rise and Fall of the Cleveland Mafia" (Barricade Books, 1995), during family history research into the murders of his grandfather and three uncles who were Mafia leaders during Prohibition. Porrello self-published his second title, "To Kill the Irishman "(Next Hat Press, 1998), which was adapted for film and became the major motion picture, Kill the Irishman, starring Ray Stevenson, Vincent D'Onofrio, Christopher Walken and Val Kilmer. His current book, "Superthief: A Master Burglar, the Mafia, and the Biggest Bank Heist in U.S. History "(Next Hat Press, 2005), is a Foreword Magazine award winner and currently in developmentfor film. Porrello is an accomplished drummer and spent two and a half years traveling internationally with the great Sammy Davis Jr.before he left to pursue a career in law enforcement. He conducts presentations on the history of organized crime and is also a writing and self-publishing consultant.