Alcatraz: A History of the Penitentiary Years (Hardcover) 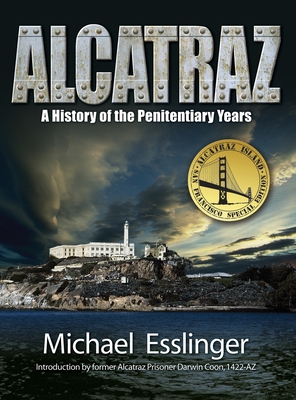 Alcatraz: A History of the Penitentiary Years (Hardcover)

ALCATRAZ - the name alone said it all... It was meant to send a shudder down the spines of the nation's most incorrigible criminals. It stripped Al Capone of his power. It tamed "Machine Gun" Kelly into a model of decorum. It took the birds away from the Birdman of Alcatraz.

When prisoners boarded the boat for Alcatraz, they knew that they had reached the end of the line. Not only was this the toughest of all Federal penitentiaries, but it was also said to be virtually escape-proof. The island was a natural fortress, separated from the mainland by a narrow strait of freezing water and deadly currents. This prison was the U.S. government's drastic answer to the lawlessness unleashed under Prohibition, which continued throughout the "Roaring Twenties" and into the teeth of the Great Depression. Alcatraz, with its damp cold and austere isolation, its rigid discipline and strict rule of silence, was as tough as the criminals that were sent there, and by the time the prison closed down in 1963, "the Rock" had indisputably done its job.

Alcatraz - A History of the Penitentiary Years has sustained as a staple reference for staff members on Alcatraz and remains one of the most comprehensive references chronicling the history. This mammoth reference navigates the island's history through rarely seen documents, interviews and hundreds of pages of historic photographs. Author interviews range from men such as legendary FBI fugitive James "Whitey" Bulger; Dale Stamphill, a principal in the 1938 escape with Doc Barker and Henry Young; to Atom Spy Morton Sobell, the codefendant of Julius and Ethel Rosenberg.

Michael Esslinger thoroughly details the prominent events, inmates, and life inside the most infamous prison in American History. His research included hundreds of hours examining actual Alcatraz inmate case files (including rare original documents from Al Capone, Machine Gun Kelly, and over a hundred others) exploring the prison grounds from the rooftop to the waterfront to help retrace events, escape routes, in addition to conducting various interviews with former inmates & guards. Esslinger interviewed a variety of principle figures, comprised of both convicts and officers who were either involved, on-duty, or on Alcatraz during nearly escape attempt. Interviews included prisoners and officers that covered each era of operations at Alcatraz from the early military period in the late 1920's, through the federal years, 1934 to 1963.

His study has resulted in detailed accounts of all the recorded escape attempts including the Battle of Alcatraz. A detailed account of the 1962 escape of Frank Morris and the Anglin Brothers provides rare insight extracted through photos, and over 1,700 pages of FBI and Bureau of Prisons investigative notes.

Detailed narratives of Alcatraz's most notable inmates who include Robert Stroud (Birdman of Alcatraz), Al Capone, Machine Gun Kelly, Frank Morris, the Anglin Brothers, Doc Barker, Joe Cretzer, Bernard Coy, Miran Thompson, Sam Shockley, and many-many others. Alcatraz: The History of the Penitentiary Years, is a comprehensive reference on the history of Alcatraz and contains one of the most comprehensive archives of inmate and prison life photographs (over 1,000).

WARNING: This book contains graphic depictions of extreme crime and violence and may not be suitable for all readers.