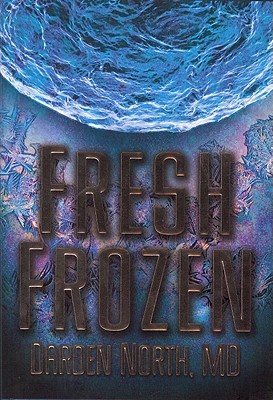 By Darden North
Special Order -- Email or Call for Availability

In this third medical thriller by award-winning author and practicing physician Darden North, human reproductive tissue becomes an unexpected commodity. In Fresh Frozen, a young policeman and his tormented wife fail miserably to produce a family, finding themselves outcasts of the renewed baby boom sweeping the United States. However, there is one last hope for them: a catalogue of human embryo and egg donors peddled by a woman whose standards are easily dismissed for the right price. Pursuing their futile attempts to become parents have nearly cost the wife her life and pushed the couple to the brink of bankruptcy. This seemingly last chance for Wesley and Carey Sarbeck to satisfy their place as parents in Middle America unknowingly tosses them in the midst of a grisly murder, the world of Hollywood celebrities, and a heist of freshly frozen human embryos. The lives of Carey Sarbeck and two other women intersect at the Van Deman Institute, once a decaying brick building complex just north of Jackson, Mississippi, but now a state-of-the-art center for the resolution of human infertility. While an internet voyeur and thief looks on, each of the three women, one of whom an internationally-known entertainer, has her own reason for entering the Institute. However, as a result of subjecting herself to a concoction of hormones and surgical procedures, one of the three is gruesomely murdered in an intriguing twist of human greed, mental torment, and medical science.

Darden North, MD, is a twenty-two year practicing obstetrician-gynecologist in Jackson, MS. With a background that lends unmistakable authenticity to his medical thrillers, North's characters are intense. Often compared to the style of James Patterson, Greg Iles, and early John Grisham, Darden North is a member of Mystery Writers of America, Sisters in Crime, the Mississippi Writer's Guild, and the Independent Book Publishers Association. North has presented at the Texas, South Carolina, and Kentucky Bluegrass book festivals; the Southern Independent Book Association; and Alabama's Murder in the Magic City-Murder on the Menu. More than 50 television and radio stations in several states have interviewed Darden North, who has appeared at over 100 book signings or public engagements with more scheduled. A few years ago, North dumped his golf clubs for a laptop. He and his wife, Sally, have two grown children and three dogs.