Uleyli-The Princess & Pirate (A Junior Graphic Novel): Based on the true story of Florida's Pocahontas (Hardcover) 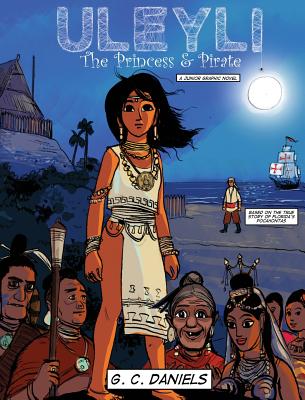 Uleyli-The Princess & Pirate (A Junior Graphic Novel): Based on the true story of Florida's Pocahontas (Hardcover)

Uleyli is a princess-but she isn't happy with all that comes with it. She'd rather daydream and create art than learn how to rule her people. When a Spanish boy, Juan Ortiz, is captured by Uleyli's father, she intervenes on his behalf and begins to plot her escape from her village. As she dreams of a new life in Cuba, Uleyli encounters a series of problems that put her dreams at risk. To solve her problems she will need to use the power of her creativity to help save her new friend, her village, and herself.

This graphic novel was inspired by the true story of a young Native American woman, Ulele, known as Florida's Pocahontas. The beautiful full-color illustrations and simple text paint a picture of life in 16th-century Native American villages in what is now the southeastern United States. This is a story celebrating Ulele's creativity and non-violent heroism.

Perfect for young fans of graphic novels (ages 9 - 12) who are interested in learning more about US history.Also available as an illustrated chapter book, perfect for classroom reading.