And What Is Hell?: A True Story: Exposing the Dark Secrets of "the Insane Asylum" (Paperback) 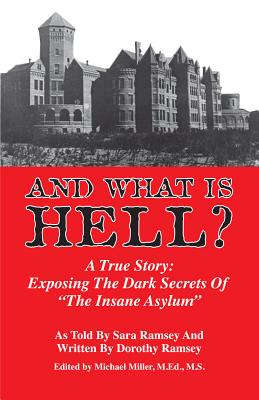 And What Is Hell?: A True Story: Exposing the Dark Secrets of "the Insane Asylum" (Paperback)


Email or call for price.
A True Story: Exposing The Dark Secrets Of The Insane Asylum I did not know it was hell until that first night A place of cruel torture, of starvation, of murder, of flagrant injustice, of hatred, of despair, of envy. As Told By Sara Ramsey And Written By Dorothy Ramsey Sara and James, who with all their hungry souls sought the truth and understanding of God's Words, (as evidenced by her poetry throughout the book), were apprehended on December 18, 1912, judged and committed without a trial or defense for being impoverished street preachers and for living together while not being legally married by the laws of man. They were sent to Patton State Hospital, then known as The Insane Asylum, in San Bernardino County, California. At the time qualifying afflictions included: religious excitement, spiritualism, worry, overwork, love affairs, seduction, alcoholism, drug and tobacco abuse, privation, politics, asthma, desertion by husband, grief, change of life and old age. Whether sent by a judge or family member, the poor unfortunates institutionalized lost every freedom and were deprived of human rights and dignity. The horrors were indelibly impressed in Sara's mind. She felt if she told her story it could save others from anguish and torment. This story is important because people are important. How we treat the young, the elderly, weak, vulnerable, mentally ill or physically ill, the poor and homeless is ultimately a true reflection of our society.