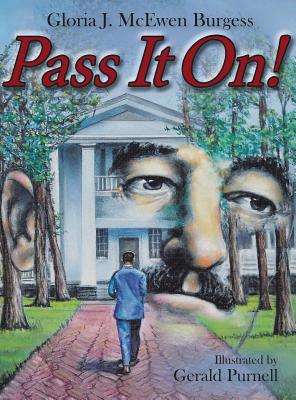 Pass It On by Gloria J. McEwen Burgess and illustrated by Gerald Purnell is a children's picture book about the author's father, Earnest McEwen Jr., and his life-changing relationship with Nobel Laureate and Pulitzer Prize-winning author William Faulkner.

As a young boy, Ernie (Earnest McEwen Jr.) dreamed of a better life for his family in the segregated South of the 1930s. More than anything, he wanted to go to college.

While working as a janitor at Ol' Miss (the University of Mississippi), Ernie spoke to a professor about his burning desire to go to college, setting in motion a series of events that would change his and his family's life for all time. One of those significant events was meeting Nobel Laureate and Pulitzer Prize-winning author William Faulkner.

​Faulkner helped Ernie attend college, paying for his tuition and expenses with no strings attached. His generous financial gift allowed Ernie to go to college, move out of the South, and eventually emerge from poverty. Ernie made a better life for his family, who continue to live a legacy of life-long learning and service, passing on their blessings to the next generation and the next, creating a ripple effect that will bless generations to come.

Kirkus Review
Pass It On
by Gloria J. McEwen Burgess and illustrated by Gerald Purnell

An author and inspirational speaker offers a picture-book biography of her father that explores segregation and access to education.

Set during the 1930s in a segregated Mississippi, Burgess' (Flawless Leadership, 2016, etc.) work chronicles how, as a boy, Earnest McEwen Jr. loved to read anything he could get his hands on. His black parents both worked in the cotton fields, and Ernie dreamed of a better life for his family. He wanted to go to college. Ernie finished high school, where he met his future wife, Millie. After getting a job as a janitor at the University of Mississippi, he met two professors who introduced him to William Faulkner. The author changed Ernie's life by paying his tuition to Alcorn, a university for black students. "Pass it on"--the only repayment Faulkner requested--became Ernie's motto, which he gave to his daughters, as explained in the author's note at the end. The superb story is full of hope, showing people reaching across boundaries to help one another and provide a better life for the next generation. The details in Purnell's (A Homerun for Bunny, 2013, etc.) beautifully realistic paintings and his attention to the faces of his subjects draw in readers. In this book, initially funded via Kickstarter, Burgess' vocabulary is accessible. While she never talks down to readers, she presents the material in an approachable fashion.This excellent and uplifting account of a grim American era promotes hope and kindness.