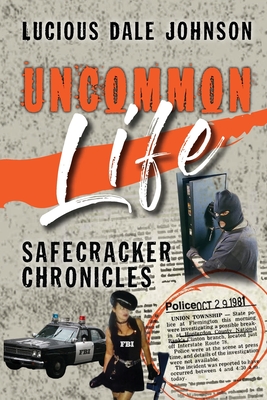 Uncommon Life: Safecracker Chronicles is a true-crime memoir based on the early life and commercial burglary career of Lucious Dale Johnson.

It begins with Johnson's younger years growing up in Florida until the devastating loss of his sister, after which his family relocated to Reading Pennsylvania. During his youth, he learned to never tell on himself, work with people that are all in, and to trust no one.

Johnson build an early life history that allows the reader to gain insight on where Johnson's draw to breaking rules began and how he landed in the sights of Big G and the Diamond Gang. It ends at his first arrest, bailing out, and diving straight into commercial burglary with the Diamond Gang.

After being released from jail, he makes his most significant life decision, that he "didn't want to live a normal life." He wanted to make money and would be doing just that until the end of the story, by scoring burglary jobs that leave his crew and himself bobbing in and out of trouble with the law.

Every short story told in this memoir is intriguing, and you can't help but be pulled into this world that Dean lived in. The characterization built up gives Dean an incredible voice and persona. He learned from a young age how to work his way out of the downside by luck and wit. I love the way the memoir begins and gives readers that glimpse into his childhood. Johnson's youth is much different than children will experience today, and it adds a thrill factor to the period he grew up in. It builds his character perfectly and sets the story up for the second half.

The second half of the book is comprised of story after story of heist jobs, running from the law, and succumbing to being caught. The tension and conflict are high throughout each story. The voice is authentic and charismatic, making it easy to read and paces the story well. The story concept is original and based on a true story, which makes this a unique story to produce. I l liked the way that the police's side of the story is worked in through newspaper headlines and interaction between the characters when they are arrested. This opens the door for creating those dynamics on-screen with the context provided in the story.

The writer is a natural storyteller, giving just enough detail to engage the reader and take them on their journey. The tone is blunt, honest, and magnetic, you can't help but find yourself entertained and amazed at the life this man has lived.