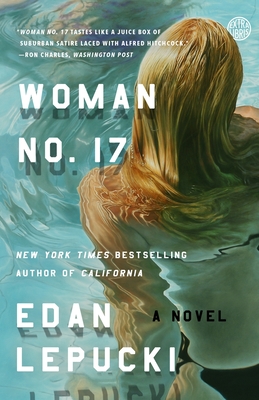 Edan Lepucki's second novel, following California, features a young woman who, trying to find breathing space enough to write a memoir, hires a young nanny, "S," or Esther, an artist, to live in the small guest hovel behind the house and take care of her toddler while also keeping an eye on her mute teenage son. A sometimes comical, psychologically complex and suspenseful story—a family noir—soon has you in its grip, pulling for these souls in the Los Angeles hills.

Virtually nothing is as it seems in this stylish novel of two women whose lives become increasingly intertwined.  Lady Daniels and her nanny, S, develop a bond that has multiple layers filled with deception and one that corrupts both.  What on the surface appears to be a novel of family slowly builds suspense and becomes something entirely different.  Filled with a pungent, dark humor the reader is drawn inexorably into this tale of people whose lives are totally at variance with their surface appearance.

High in the Hollywood Hills, writer Lady Daniels has decided to take a break from her husband. Left alone with her children, she’s going to need a hand taking care of her young son if she’s ever going to finish her memoir. In response to a Craigslist ad, S arrives, a magnetic young artist who will live in the secluded guest house out back, care for Lady’s toddler, Devin, and keep a watchful eye on her older, teenage son, Seth. S performs her day job beautifully, quickly drawing the entire family into her orbit, and becoming a confidante for Lady.

But in the heat of the summer, S’s connection to Lady’s older son takes a disturbing, and possibly destructive, turn. And as Lady and S move closer to one another, the glossy veneer of Lady’s privileged life begins to crack, threatening to expose old secrets that she has been keeping from her family. Meanwhile, S is protecting secrets of her own, about her real motivation for taking the job. S and Lady are both playing a careful game, and every move they make endangers the things they hold most dear.

Darkly comic, twisty and tense, this mesmerizing new novel defies expectation and proves Edan Lepucki to be one of the most talented and exciting voices of her generation.
Edan Lepucki is the New York Times bestselling author of the novel California as well as the novella If You're Not Yet Like Me. A contributing editor and staff writer at the Millions, she has also published fiction and nonfiction in McSweeney's, the Los Angeles Times, the New York Times, the Cut, and elsewhere. She is the founder of Writing Workshops Los Angeles.

“A story packed with such wicked and wickedly funny confessions about a host of hallowed subjects. . . . Lepucki’s witty lines arrive as dependably as afternoon playtime, but her reflection on motherhood and women’s friendships is deadly serious. . . .The disclosures that Lepucki engineers in this smart novel are sometimes painful, sometimes hilarious, always irresistible.”—Ron Charles, Washington Post

“A dark and clever tale about motherhood and the complexity of friendships.”—SFWeekly

“Woman No. 17 reads like a Hollywood Hills film noir . . . the dialogue is sharp, the fragrance of the wilting air palpable.”—Seattle Times

“With Woman No. 17, Lepucki has succeeded in revealing a simple truth: mothers are human—flawed and difficult and impossible to hold at arm’s length.”—Paste

“Female friendships, artists, twisted secrets, motherhood, and the posh and drama-filled hills of Los Angeles — if that doesn't sound like a novel your mom will literally gobble up in a day or two, we give up. This risqué and mesmerizing read by New York Times bestselling author Edan Lepucki will make your mom race through the addictive pages of Woman No. 17 in no time (and we wouldn't be surprised if she rereads it again and again).”—PopSugar

“Tensions are expertly spun by Edan Lepucki through the heat of the end of summer in LA. . . . Woman No. 17 starts and finishes in the here and now, and shows up the fragility of the facade of civilization that we all in the Western world, be it in American or Europe, like to think we hold up.”—Electric Literature

“[A] Hollywood noir about the electric bonds between women . . . this one is a safe bet for beach season.”—The Week

“Lepucki’s brisk style and arresting characterizations make for a compelling portrait of womanhood in the present moment, right down to its intriguing integration of social media.”—Publishers Weekly

“An acidly inquisitive domestic drama set in the Hollywood Hills and anchored to depthless questions of identity, family, and art. . . . Lepucki’s arch and provocative tale of elaborate and privileged dysfunction poses sharp questions about inheritance, self-expression, and love.”—Booklist

“In Woman No. 17, Lepucki has crafted an intricate, gripping story of people behaving very badly. You will want to race to the end to see what happens, but don’t cheat yourself. This book deserves to be savored –gorgeously written, darkly comic, smart and thrilling.”—Cynthia D’Aprix Sweeney, New York Times bestselling author of The Nest

“Woman No. 17 fizzes with references to contemporary culture and sparks with larger, timeless questions: Where is the line between performance and identity? What separates life from art? And can we ever escape the gravitational pull of our parents? Edan Lepucki shows herself to be a sharp-eyed chronicler of our modern world.”—Celeste Ng, New York Times bestselling author of Everything I Never Told You