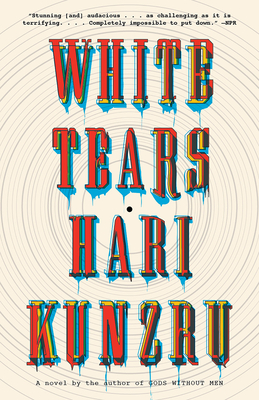 “An unsettling, grungy, gorgeous tale of white appropriations of black culture, legacy, and memory, of the harrowing effects of racism through the years, of a haunting that resonates through generations through a blues song that should have been stamped on vinyl, that maybe was but never was. This is a story of the costs of a lack of reparations, of money and power and powerlessness, all tied up in the viscerally kinetic prose of an author writing about obsession. Beautiful, ugly, indelible writing makes this a book I won't soon forget.”
— Gretchen Treu (E), A Room of One's Own Feminist Bookstore, Madison, WI

Seth and Carter are young music producers but when they create a blues song that purports to be an early, lost recording, they open themselves to a world of mystery and violence.  As two generations of obsessed collectors make their way to Mississippi they enter a phantasmagorical realm where history if ever present and ready to mete out punishment for the sins of the past.  Written in prose that brings the music alive, the author has created a discourse on cultural appropriation that is both pointed and disquieting while also absorbing the reader.

ONE OF THE BEST BOOKS OF THE YEAR: The Washington Post • San Francisco Chronicle • NPR • GQ • Time • The Economist • Slate • HuffPost • Book Riot

Ghost story, murder mystery, love letter to American music--White Tears is all of this and more, a thrilling investigation of race and appropriation in society today.

Seth is a shy, awkward twentysomething. Carter is more glamorous, the heir to a great American fortune. But they share an obsession with music--especially the blues. One day, Seth discovers that he's accidentally recorded an unknown blues singer in a park. Carter puts the file online, claiming it's a 1920s recording by a made-up musician named Charlie Shaw. But when a music collector tells them that their recording is genuine--that there really was a singer named Charlie Shaw--the two white boys, along with Carter's sister, find themselves in over their heads, delving deeper and deeper into America's dark, vengeful heart. White Tears is a literary thriller and a meditation on art--who owns it, who can consume it, and who profits from it.
HARI KUNZRU is the author of four previous novels. His work has been translated into twenty-one languages, and his short stories and journalism have appeared in many publications, including The New York Times, The Guardian, and The New Yorker. He is the recipient of fellowships from the Guggenheim Foundation, The New York Public Library, and the American Academy in Berlin. He lives in Brooklyn.
"White Tears is distinguished by a knowledge of blues at its deepest, a gift for observation at its most penetrating and stretches of plain old marvelous writing, some swallowing up the pages around them the way a single song . . . swallows up the side of an album. . . . Kunzru brings a canny and original insight to his American subject. . . . [His] awareness and discernment have particular value in an America of the moment where nothing less than the country’s meaning is at stake.”—Steve Erickson, The New York Times Book Review

"White Tears is a book that everyone should be reading right now. . . . The reverberations of [this book] echo long after it's done. Part ghost story, part travelogue, White Tears is a drugged-out, spoiled-rotten treatise on race, class and poverty of the soul."—Claire Howorth, TIME

"[White Tears is] a novel that's as brave as it is brutal, and it lets nothing and nobody off the hook. . . . Stunning [and] audacious . . . an urgent novel that's as challenging as it is terrifying. . . . completely impossible to put down . . . [Kunzru’s] writing is propulsive, clear and bright, whether he's describing an old blues song or a shocking act of violence. . . . [White Tears] will shock you, horrify you, unsettle you, and that's exactly the point."—Michael Schaub, NPR

"Captivating. . . . Kunzru’s graceful writing is exquisitely attuned to his material. . . . [White Tears is] neither a clever Time and Again story of time travel nor a tricky Westworld sort of past-present parallel. White Tears is a profoundly darker and more complex story of a haunting that elucidates the iniquitous history of white appropriation of black culture."—Katharine Weber, The Washington Post

"Simply extraordinary. . . . Kunzru is a master storyteller and this is both a thrillingly written ghost story and an exploration of race conflict in America which is surely one of the best books you will read this year. Don’t miss it."—Alice O’Keeffe, The Bookseller (Book of the Month pick)