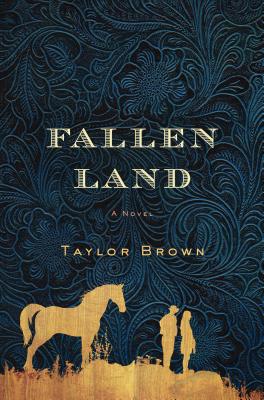 This fall-of-the-South epic makes for a powerful debut. Trapped between rogue Confederates and Sherman’s sweep of Georgia, a star-crossed pair must fight their way to safety against all odds. Ava and Callum must flee from the men they once fought alongside to gain their freedom in a barren and haunting landscape. Fallen Land harks back to Cormac McCarthy’s works and Scarlett’s flight from Atlanta in Gone With the Wind. You will feel the pair’s cold and hunger in your bones.

An Indie Next pick, an Okra 2016 Winter Selection, and a SIBA Bestseller!

Fallen Land is Taylor Brown's debut novel set in the final year of the Civil War, as a young couple on horseback flees a dangerous band of marauders who seek a bounty reward. Callum, a seasoned horse thief at fifteen years old, came to America from his native Ireland as an orphan. Ava, her father and brother lost to the war, hides in her crumbling home until Callum determines to rescue her from the bands of hungry soldiers pillaging the land, leaving destruction in their wake. Ava and Callum have only each other in the world and their remarkable horse, Reiver, who carries them through the destruction that is the South. Pursued relentlessly by a murderous slave hunter, tracking dogs, and ruthless ex-partisan rangers, the couple race through a beautiful but ruined land, surviving on food they glean from abandoned farms and the occasional kindness of strangers. In the end, as they intersect with the scorching destruction of Sherman's March, the couple seek a safe haven where they can make a home and begin to rebuild their lives. Dramatic and thrillingly written with an uncanny eye for glimpses of beauty in a ravaged landscape, Fallen Land is a love story at its core, and an unusually assured first novel by award-winning young author Taylor Brown.

TAYLOR BROWN grew up on the Georgia coast. He has lived in Buenos Aires, San Francisco, and the mountains of western North Carolina. He is the recipient of the Montana Prize in Fiction and a finalist for the Southern Book Prize. His novels include Fallen Land, The River of Kings, Gods of Howl Mountain, and Pride of Eden. He lives in Savannah, Georgia.

"Like McCarthy's Border Trilogy or Frazier's Cold Mountain, this is American literature at its best, full of art and beauty and the exploration of all that is good and bad in the human spirit." --Kirkus, starred review

"This is a masterpiece that deserves a full serving of accolades." --Booklist, starred review

"Brown’s expressive language captures the harsh realities of the South at the time. A nail-biting journey from first page to last." --Library Journal, starred review

“A story of love and loyalty set within the madness and chaos of war, Fallen Land is also a thrilling fugue, in both senses: of flight, and intricate composition. It is also the story of a revenge quest, the horrors of Sherman's March, a noble horse named Reiver, of sacrifice, endurance, and redemption. No one who reads Fallen Land will ever forget it. In this first novel Taylor Brown proves himself a fresh, authentic, and eloquent new voice in American fiction.” —Robert Morgan, author of Gap Creek, Boone, and The Road from Gap Creek

“A shattering debut that puts one strongly in mind of the young Cormac McCarthy, and the best historical fiction I've read in ages.” —Pinckney Benedict, author of Town Smokes, The Wrecking Yard, and Dogs of God

“It is rare thing for a writer to have the talent and scope to exhibit both the worst and best of humanity in one book, much less in one scene, but that's what Brown does here: He literally floods the page with violent beauty and devastating grace. Well-known and oft-praised writers will look back on long and storied careers only to wish they had written a debut novel as flawless as Fallen Land.” —Wiley Cash, author of A Land More Kind Than Home

“Taylor Brown has given us the wonderful tale of Callum, who will make his way through his own private Civil War. His is not so much a war of grand battles and armies, but a real war of personal survival. Powerfully written, wonderfully told, Fallen Land needs to be part of every collection of great storytelling of the American Civil War.” —Robert Hicks, author of The Widow of the South and A Separate Country

"Harrowing and haunting, Brown’s novel travels through the brutality of the Civil War, the desperate yearning of young love, and the glint of hope that can illuminate tragedy. Thanks to Brown’s genius, you don’t just read this book--you inhabit it." --Caroline Leavitt, New York Times bestselling author of Is This Tomorrow and Pictures of You