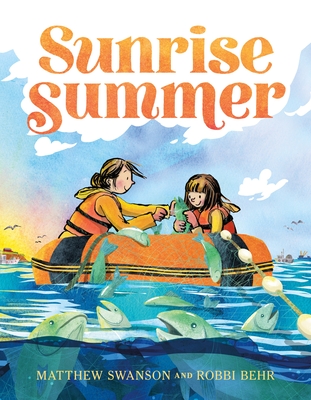 Sunrise Summer is a picture book by writer Matthew Swanson and illustrator Robbi Behr that celebrates self-confidence and empowerment, as a girl’s role changes in her family’s fishing expeditions.

When a girl and her family travel four thousand miles from home, it’s not your typical summer vacation. Everything is different on the Alaskan tundra—where the grizzly bears roam and the sockeye salmon swim—including the rules. A girl can do things she wouldn’t, and couldn’t, do at home.

She can wake up at midnight to work with her mom on a fishing crew. She can learn what it means to be an essential part of a team. She can become a braver, stronger, and ever-more capable version of herself. She can take her next big step.

When Matthew Swanson and Robbi Behr aren’t making books (Babies Ruin Everything; Everywhere, Wonder; and the Real McCoys series) and raising kids (four, so far, which is probably enough), they run a commercial salmon fishing operation on the Alaskan tundra, where Robbi has spent every summer since she was two years old.

When Matthew Swanson and Robbi Behr aren’t making books (Babies Ruin Everything; Everywhere, Wonder; and the Real McCoys series) and raising kids (four, so far, which is probably enough), they run a commercial salmon fishing operation on the Alaskan tundra, where Robbi has spent every summer since she was two years old.

“[The narrator’s] eagerness and pride over being part of this work is palpable, and each moment feels important, locked in Behr’s artwork as an individual frame among many or as a sweeping two-page spread that captures its magnitude and beauty. The excellent back matter reveals that this story is about the creators’ own family, laying out their history as commercial salmon fishers, protections in place to prevent overfishing, and how some Alaska Natives continue to catch salmon according to their traditions. Eye-opening and awesome.” —Booklist, starred review

“With irrepressible enthusiasm and an astute sense of detail, the child recounts the elaborate preparations (almost all supplies have to be brought in), the connection to nature and a close-knit community, and the grueling but exciting work itself. . .Readers may not be ready to sign on, but they’ll feel grateful for being afforded a spectacular front-row seat.” —Publishers Weekly, starred review

“Paired with ebullient first-person prose, the illustrations immerse readers in the changing colors of the sky and waves throughout the thrilling event . . . An informative first-person story that combines family history with STEM concepts for a summer to remember.” —Kirkus Reviews

“Detailed and vibrant illustrations . . . This is an engaging tale about a summer vacation that is far from ordinary.” —School Library Journal

“The cast of family and fellow fishers evince a cheerful, busy-about-their-business camaraderie that recall the relaxed renderings of Matthew Cordell. Illustrated closing notes provide scads of background information on everything from Aleut fishing practices to salmon conservation regulations, methods of salmon fishing, and commercial processing (‘In an average summer, our family catches about ten thousand fish—not including the ones we eat!’). It’s a good guess many listeners would love to join them.” —Bulletin of the Center for Children's Books