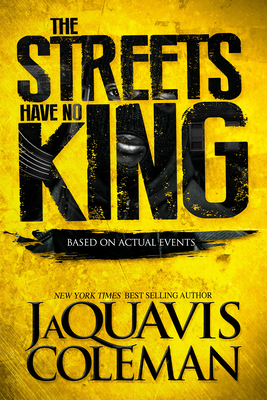 By JaQuavis Coleman
$16.99
Backordered -- Email or Call for Availability

A street thriller of kidnapping, murder, trickery, and love that will have you at the edge of your seat.

After 7 years of prison, multi-millionaire drug mogul Kane Garrett is back on the streets. But instead of diving back into the drug game, he’s teaching a college class, infusing business principles with his signature ruthless edge he developed in the streets. When a student—and heavy heroin dealer—named Basil catches Kane’s eye, Kane takes him on as a protégé and together, they build the biggest, smartest drug trafficking business the state has ever seen.

But when Basil meets Moriah, Kane’s only daughter, lines get crossed and their dominant business union becomes a deadly rivalry. Welcome to a world where the kings meet their end and no one stays at the top for long. The crown always lies heavy on he who commands the streets—and Kane and Basil will fight to claim their rule, before power is toppled again, in The Streets Have No King by New York Times bestselling author JaQuavis Coleman.

JaQuavis Coleman is the prolific writer from Flint, Michigan and is known for his witty street tales that depict the street/urban lifestyle. His clever storytelling ability gives readers a perspective from a young street hustler and the authenticity is evident. In 2013 he was honored by Ebony magazine as being one of the top 100 most influential African Americans in the country. He's the author of The Dopeman series and The Cartel 6: The Demise, with Ashley Antoinette Coleman.