Mockingbird: A Portrait of Harper Lee: From Scout to Go Set a Watchman (Hardcover) 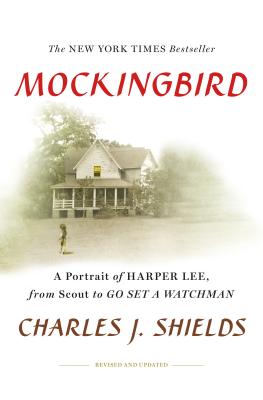 Mockingbird: A Portrait of Harper Lee: From Scout to Go Set a Watchman (Hardcover)

An extensively revised and updated edition of the bestselling biography of Harper Lee, reframed from the perspective of the recent publication of Lee's Go Set a Watchman

To Kill a Mockingbird—the twentieth century's most widely read American novel—has sold thirty million copies and still sells a million yearly. In this in-depth biography, first published in 2006, Charles J. Shields brings to life the woman who gave us two of American literature's most unforgettable characters, Atticus Finch and his daughter, Scout.

Years after its initial publication—with revisions throughout the book and a new epilogue—Shields finishes the story of Harper Lee's life, up to its end. There's her former agent getting her to transfer the copyright for To Kill a Mockingbird to him, the death of Lee's dear sister Alice, a fuller portrait of Lee’s editor, Tay Hohoff, and—most vitally—the release of Lee's long-buried first novel and the ensuing public devouring of what has truly become the book of the year, if not the decade: Lee's Go Set a Watchman.

Charles J. Shields is the author of Harper Lee’s New York Times bestselling biography Mockingbird, the Kurt Vonnegut biography And So It Goes, and the biography of John Edward Williams, The Man Who Wrote the Perfect Novel. Shields has spoken to hundreds of large audiences in schools, libraries, museums, and historic theaters and appeared in newspapers and magazines worldwide, including the Wall Street Journal, New Yorker, Huffington Post, and New York Times.

Praise for Mockingbird:
“Harper Lee caught the beauty of America with To Kill a Mockingbird, but has remained something of a mystery ever since. Charles J. Shields's portrait of her, Mockingbird, shows us a quietly reclusive, down-to-earth woman with an enormous gift and documents her struggle to live with that gift for the rest of her life. Shields evocation of both the woman and her beautiful, sleepy, and smoldering South are pitch perfect.” – Anne River Siddons, author of Sweetwater Creek and other books

“Harper Lee's intense personal privacy sets daunting limitations for a biographer, but Charles Shields has ingeniously recovered the feel of her childhood world of Monroeville, Alabama, and the small-town Southern customs and vivid personalities that shaped her prickly independence. Detailed memories of Lee's classmates and friends are interwoven with dramatic recreations of key events and stories of her friendships and literary collaborations, all fleshing out the general narrative of her development as a novelist. Close attention to her friendship with Truman Capote and the conditions of the writing and then the filming of To Kill a Mockingbird offer special fascination.” – Louise Westling, Professor of English, University of Oregon, author of Sacred Groves and Ravaged Gardens: The Fiction of Eudora Welty, Carson McCullers, and Flannery O'Connor

“If there is a great American novel, certainly To Kill a Mockingbird is it. But, for all of us who love it, its author has always been an enigma. Did Harper Lee really write this classic? And if she did, why didn't she ever write another book? And who is Harper Lee, anyway? Finally, a writer has done the necessary research to reveal the surprising answers. To every To Kill a Mockingbird reader, I send this message: The story isn't over. There's so much more to come, and you'll find it all in Charles Shields' delightful and insightful Mockingbird. ” – Homer Hickam, author of Rocket Boys