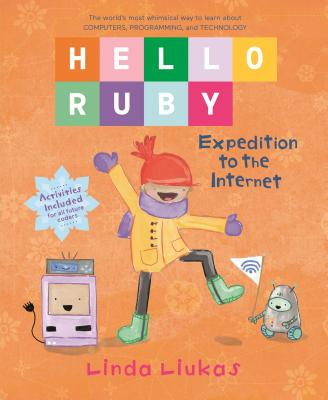 This is book number 3 in the Hello Ruby series.

Welcome back to the world's most whimsical way to learn about technology and coding in Hello Ruby: Expedition to the Internet, as Linda Liukas, a programming superstar, teaches kids all about the internet through storytelling and imaginative activities.

What exactly is the Internet? Is it a cloud? A network of wires? How does the information travel online? Learn all this and more with Ruby!

In Ruby’s world anything is possible if you put your mind to it—even building the Internet out of snow! But before you can build something, you need to understand what it is and how it works. Join Ruby and her friends in their quest to build the most amazing Snow Internet ever, while learning real life facts along the way. Then, future kid coders can put their knowledge and imaginations to the test with the fun and creative exercises included in the activity book section.

Linda Liukas is a programmer, storyteller, and illustrator from Helsinki, Finland. The idea for Hello Ruby first made its debut on Kickstarter and quickly smashed its $10,000 funding goal in just three and a half hours gathering $380,000 in total to become Kickstarter's most funded children's book.

Linda is a central figure in the world of programming and worked on edutech before it was even called that. Linda is the founder of Rails Girls, a global phenomenon teaching the basics of programming to young women all over the world. The workshops, organized by volunteers in over 160 cities, have in a few years taught more than 10,000 women the foundations of programming.

Linda has studied in business, design, and engineering at Aalto University and product engineering at Stanford University. She was selected as the 2013 Ruby Hero (the most notable prize within the Ruby programming community) and she's the Digital Champion of Finland, appointed by EU commissioner Neelie Kroes. She lives in Helsinki, Finland.