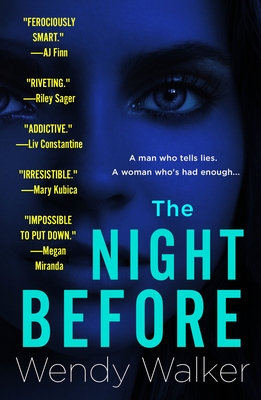 “Laura has gone missing after going out on a first date with someone she met on a dating site…at least her older sister, Rosie, thinks she is missing. The Night Before is told from Laura’s point of view from the night before and from Rosie’s the morning after. Wendy Walker’s latest is filled with psychological trauma and even a series of sessions with a psychologist, which adds believability and gives insight into who Laura is. As usual, I couldn’t stop reading and was surprised more than once. With a heavy dose of psychology, The Night Before is a true thriller you won’t want to miss.”
— Nancy McFarlane, Fiction Addiction, Greenville, SC

Riveting and compulsive, national bestselling author Wendy Walker’s The Night Before “takes you to deep, dark places few thrillers dare to go” as two sisters uncover long-buried secrets when an internet date spirals out of control.

First dates can be murder.

Laura Lochner has never been lucky in love. She falls too hard and too fast, always choosing the wrong men. Devastated by the end of her last relationship, she fled her Wall Street job and New York City apartment for her sister’s home in the Connecticut suburb where they both grew up. Though still haunted by the tragedy that’s defined her entire life, Laura is determined to take one more chance on love with a man she’s met on an Internet dating site.

Rosie Ferro has spent most of her life worrying about her troubled sister. Fearless but fragile, Laura has always walked an emotional tightrope, and Rosie has always been there to catch her. Laura’s return, under mysterious circumstances, has cast a shadow over Rosie’s peaceful life with her husband and young son – a shadow that grows darker as Laura leaves the house for her blind date.

When Laura does not return home the following morning, Rosie fears the worst. She’s not responding to calls or texts, and she’s left no information about the man she planned to meet. As Rosie begins a desperate search to find her sister, she is not just worried about what this man might have done to Laura. She’s worried about what Laura may have done to him…

WENDY WALKER is the author of the psychological suspense novels All is Not Forgotten, Emma In The Night,The Night Before, and Don't Look For Me. Her novels have been translated into 23 foreign languages and have topped bestseller lists both nationally and abroad. They have been featured on The Today Show, The Reese Witherspoon Book Club, and The Book of the Month Club and have been optioned for television and film. Prior to her writing career, Wendy practiced both corporate and family law, having earned her J.D. from Georgetown University Law Center and her undergraduate degree from Brown University. Wendy also worked as a financial analyst at Goldman, Sachs & Co. Wendy is currently finishing her next thriller and managing a busy household in Connecticut.