I Am Perfectly Designed (Hardcover) 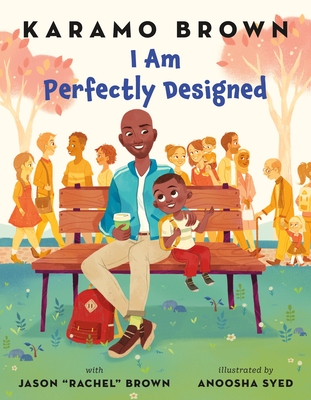 I Am Perfectly Designed (Hardcover)

I Am Perfectly Designed is an exuberant celebration of loving who you are, exactly as you are, from Karamo Brown, the Culture Expert of Netflix's hit series Queer Eye, and Jason Brown—featuring illustrations by Anoosha Syed.

In this empowering ode to modern families, a boy and his father take a joyful walk through the city, discovering all the ways in which they are perfectly designed for each other.

"With tenderness and wit, this story captures the magic of building strong childhood memories. The Browns and Syed celebrate the special bond between parent and child with joy and flair...Syed's bright, cartoon illustrations enrich the tale with a meaningful message of kindness and inclusion."—Kirkus

Karamo Brown is an American television host, reality television personality, psychotherapist and activist. He currently stars as the culture expert in the hit Netflix series Queer Eye. He is the winner of the 2018 Human Rights Campaign Visibility Award. He lives in Los Angeles with his two sons.

Jason "Rachel" Brown is a rising young star in Hollywood who has studied dramatic and comedic acting at the University of California, Los Angeles. He often draws on his own life to entertain and inspire, including his experience connecting with his father, Karamo Brown, at the age of ten. Jason lives in Los Angeles, California.

Anoosha Syed is a Pakistani-Canadian illustrator based in Toronto. She has a passion for creating cute characters with an emphasis on diversity and inclusion, and has illustrated many best-loved books for children. She is the illustrator of Bug Girl and Bug Girl: Fury on the Dance Floor, as well as I Am Perfectly Designed, written by Karamo Brown, and the Monster and Boy chapter book series, written by Hannah Barnaby.

When Anoosha isn't drawing for work, she's drawing for fun (she doesn't really have any other hobbies).

"Told in two voices, the narrative's tone is upbeat and earnest... exude[s] a breezy spirit of inclusivity."—Publishers Weekly

"A beautiful narrative of what it means to be connected to the unconditional love of a parent."—Booklist